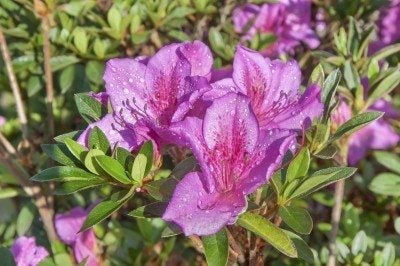 Azaleas are among the iconic flowering shrubs of the South, but they also thrive in many states across the country. They offer early spring blossoms in bright colors. Compared with other heavily blooming shrubs, azaleas are not hungry plants. Fertilizer for azaleas is often unnecessary unless the plants are showing signs of nutritional deficiency. It is important to recognize when to fertilize azalea plants and when it is not necessary. Read on for azalea fertilizer tips.

When to Fertilize Azalea Shrubs

If you work organic compost or dried, chopped leaves into well-draining garden soil before planting your azalea shrubs, this may be all of the fertilizer for azaleas that’s required. It is only if the plants show signs of nutritional deficiency or are growing too slowly that you may need to set up an azalea fertilizing schedule.

Since these symptoms can also be caused by other cultural practices, or even growing conditions like compacted soil, you’ll want to get your soil tested to see if it is lacking in nutrients. If the symptoms are caused by nutrient deficiency in the soil, fertilizer will help, but it obviously will not solve other cultural problems.

Wait until your soil test results come in to decide on treatment. Don’t spend a lot of time learning how to feed azaleas until you are sure the plants require fertilizer.

How to Feed Azaleas

The type of fertilizer your shrub requires can be determined from a soil test. If you don’t test the soil, select a general, balanced fertilizer such as 15-15-15. The numbers refer to the proportionate amounts of nitrogen, phosphorus and potassium in the product.

The nutrient your azalea is most likely to need is nitrogen. This also encourages the shrub to grow faster. Most recommendations for fertilizer for azaleas are based on nitrogen.

You’ll want to learn exactly how to feed azaleas before you begin applying the fertilizer. Since the idea is to get the fertilizer absorbed by the plant roots, you’ll want to spread it over the entire root area, which usually extends far beyond the canopy of the bush.

In fact, azalea roots can extend three times as far as the distance from the trunk to the branch tips. If that distance is three feet (91 cm.), you need to fertilize the soil 9 feet (3 m.) from the trunk. Sketch out a circle on the soil with the trunk as its center and 9 feet (3 m.) as its radius. Sprinkle the grains of fertilizer in that entire area, then water in well. Be sure to wash off any grains of the fertilizer for azalea plants that fall on the foliage.

You do not need to set up an azalea fertilizing schedule, since you don’t need to fertilize these shrubs throughout the growing season. Fertilize only when the plants show signs of needing fertilizer for azalea. Don’t ever fertilize during a drought when the plant will not have access to sufficient water.

If you use fresh sawdust or wood chips as mulch on your azaleas, you’ll probably need to fertilize the plants. Because those products decompose, they use up the nitrogen in the soil.