What Are Stomata: Stoma Plant Pores And How They Work 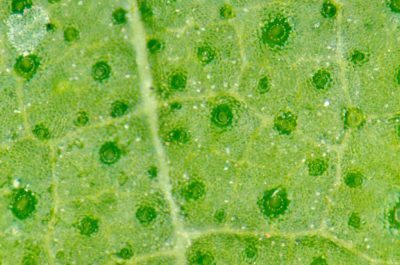 Plants are as alive as we are and have physical characteristics that help them live just as humans and animals do. Stomata are some of the more important attributes a plant can have. What are stomata? They essentially act like tiny mouths and help a plant breathe. In fact, the name stomata comes from the Greek word for mouth. Stomata are also important to the process of photosynthesis.

Plants need to intake carbon dioxide. Carbon dioxide is an essential part of photosynthesis. It is converted by solar energy into sugar which fuels the plant’s growth. Stomata aid in this process by harvesting the carbon dioxide. Stoma plant pores also provide a plant’s version of an exhale where they release water molecules. This process is called transpiration and enhances nutrient uptake, cools the plant, and ultimately allows carbon dioxide entry.

Under microscopic conditions, a stoma (a single stomata) looks like a tiny thin-lipped mouth. It is actually a cell, called a guard cell, which swells to close the opening or deflates to open it up. Every time the stoma open, water release occurs. When it is closed, water retention is possible. It is a careful balance to keep stoma open enough to harvest carbon dioxide but closed enough that the plant doesn’t dry out.

Stomata in plants essentially play a similar role to our respiration system, although bringing oxygen in is not the goal, but rather another gas, carbon dioxide.

Stomata react to environmental cues to know when to open and close. Stomata plant pores can sense environmental changes such as temperature, light, and other cues. When the sun comes up, the cell begins to fill with water.

When the guard cell is completely swollen, pressure builds up creating a pore and allowing the escape of water and exchange of gas. When a stoma is closed, the guard cells are filled with potassium and water. When a stoma is open, it is filling with potassium followed by an influx of water. Some plants are more efficient at keeping their stoma cracked open just enough to allow CO2 in but reduce the amount of water lost.

While transpiration is an important function of stomata, the gathering of CO2 is also vital to plant health. During transpiration, the stoma is off-gassing the waste by-product of photosynthesis – oxygen. The harvested carbon dioxide is converted into fuel to feed cell production and other important physiological processes.

Stoma are found in the epidermis of stems, leaves, and other parts of the plant. They are everywhere in order to maximize the harvest of solar energy. In order for photosynthesis to occur, the plant needs six molecules of water for every six molecules of CO2. During extremely dry periods, the stoma stays closed but this can minimize the amount of solar energy and photosynthesis that occurs, causing reduced vigor.