What Is A Gazebo – Gazebo Landscaping Ideas 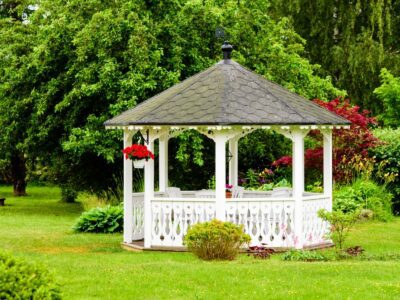 What are gazebos for? A gazebo can be a focal point for the garden, offering shade, a seating area and shelter from the elements. If you are interested in learning more about gazebo landscaping, read on.

Gazebos in the Garden

So what is a gazebo? A gazebo is a roofed open structure in the garden, often octagonal in shape, with ?posts in each of the eight corners. The typical classic gazebo is topped by a shingled roof with a small cupola on top and features built-in seating inside the sheltered area.

These structures were enjoyed by folks in ancient civilizations as outdoor, ornamental destination spots and serve much the same role today. They can add a shade element to a garden and create a lovely, romantic garden feature.

What Are Gazebos For?

Gazebos are usually constructed of wood or metal and offer an enclosure where those relaxing in the garden can protect themselves from the elements. Today’s more casual gazebos might have hammocks strung up inside, while more formal ones may shelter a dining table and chairs. They tend to look romantic and are popular spots for proposing marriage or even staging a small wedding.

In yesteryear, mall towns built gazebos in the city park that served as bandstands on weekends.  The term is said to be a “joke” word combining the verb “gaze” and the Latin suffix “ebo” meaning “I shall.” In short, a gazebo is a quiet spot to sit in the garden and gaze at the surrounding beauty.

If you are considering installing a gazebo in the garden, take your time deciding on the size, placement, and style. Figure out what activities you intend to do in the gazebo, then size it accordingly. A well-designed gazebo will go well with the style of the home and garden. It will provide a focal point without taking over the backyard.

Experts suggest that you should place the gazebo in an accessible spot with an attractive view of the house. The gazebo area should itself make a delightful vista point from the house.

Gazebos can be relatively inexpensive, but it’s equally possible to spend big bucks to make your dream gazebo a reality. Those with small backyards or small budgets should consider a portable gazebo with a fabric roof held up by metal poles, with open sides and a no floor. Permanent gazebos are fixed on a cement foundation and built with posts, beams, rafters and a roof. They are intended to be a long-term garden feature.