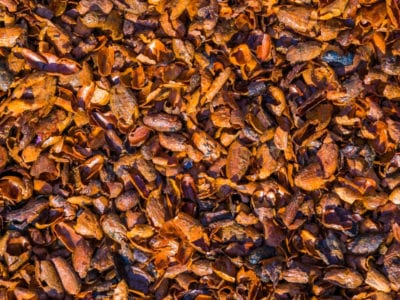 Cocoa shell mulch is also known as cocoa bean mulch, cocoa bean hull mulch, and cocoa mulch. When cocoa beans are roasted, the shell separates from the bean. The roasting process sterilizes the shells so that they are weed free and organic. Many gardeners enjoy the sweet smell and attractive appearance of cocoa shell mulch.

There are several cocoa mulch benefits to using cocoa hulls in the garden. Organic cocoa mulch, which contains nitrogen, phosphate, and potash and has a pH of 5.8, adds beneficial nutrients to the soil.

Using cocoa hulls in the garden is an excellent way to increase soil vitality and is an attractive top cover for both flower beds and vegetable patches.

While cocoa bean hulls have many benefits, there are also a few downsides to using cocoa hulls in the garden and these should be taken into consideration prior to its use.

It’s crucial not to get the mulch overly wet. When cocoa shells are too wet and not allowed to dry out between watering, pests are attracted to the moist soil and mulch. If the soil under the mulch is moist to the touch, do not water.

In hot and humid climates, cocoa shell mulch may develop a harmless mold. However, a solution of 25 percent water and 75 percent white vinegar can be sprayed on the mold.

Is Cocoa Mulch Toxic to Dogs?

Is cocoa mulch toxic to dogs? This is one of the most common questions concerning cocoa hull beans, and no cocoa hull mulch information should fail to mention its potential toxicity to dogs. Dog owners need to beware when using cocoa shell mulch that the shells do contain varying amounts of two compounds that are toxic to dogs: caffeine and theobromine.

The sweet smell of the cocoa mulch is attractive to curious dogs and could be potentially dangerous. If you have animals that have access to mulched areas in your landscape, it’s wise to consider using another non-toxic mulch instead. If your dog accidentally ingests cocoa bean hulls, call your vet immediately.