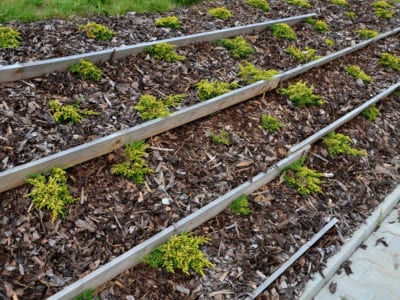 What is Cypress Mulch?

Mulch is any product you use on top of the soil to protect the roots of your plants. It can be chopped dead leaves, dried grass clippings or organic compost. Some people use shredded newspapers, gravel or plastic sheeting.

The best mulches are organic and accomplish many jobs in the garden. They regulate the temperature of the soil, keeping it warmer in cold weather and cooler in heat. They lock moisture in the soil, keep weeds down and, ultimately, decompose into the soil and improve it.

Cypress garden mulch is generally less expensive than many other organic mulches, and adds nutrients to the soil as it decomposes. It is also an effective mulch in preventing weed growth. However, putting cypress mulch in gardens has a very real dark side.

Cypress forests are critical to the ecosystems of southern states such as Florida and Louisiana. They are key elements in wetlands and provide protections from storms. Unfortunately, logging has taken its toll on the cypress population. Virtually all old-growth cypress groves have been clear cut, and what is left is under attack by the cypress mulch industry.

The wetlands in Florida and Louisiana are being cleared of cypress trees much faster than the rate cypress can naturally regrow. The use of this product could actually decrease the country’s cypress forests.

The cypress mulch industry, in its eagerness to market its product, has suggested that you cannot do better than using cypress mulch in gardens. Many of the claims of its superiority turn out to be myths. For example, contrary to reports you might see in commerce, cypress mulch is no better than other wood chips at keeping down weeds and insects.

Pine chips are just as good and do not endanger an ecosystem. In the long run, leaves, and straw from your yard or compost are usually better mulch choices for your plants.