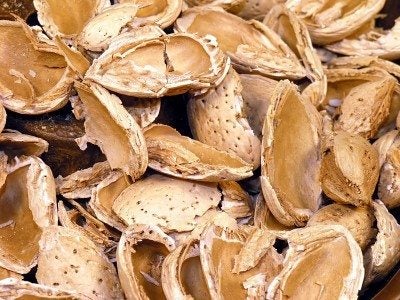 It’s baseball season again and he who shall remain nameless is blowing through bags of not only peanuts but pistachios as well. This got me to thinking about using nut hulls as mulch. Can you use nut shells as mulch? And is it okay to toss nuts in compost piles? Read on to learn more.

Can You Use Nut Shells as Mulch?

The simple answer is yes, but with a few caveats. Let’s get peanuts out of the way first. Okay, you all know that peanuts are not nuts, right? They are legumes. Nonetheless, most of us think of them as nuts. So can you use peanut shells in nut shell garden mulch? It depends on whom you ask.

One camp says, sure, go right ahead, and another says that peanut shells may carry fungal diseases and nematodes that can potentially afflict your plants. What is sure, is that peanuts are high in nitrogen and, as such, take a good while to break down but, then again, all nut shells take a while, including nuts in compost piles.

I live in the Pacific Northwest near Oregon, the leading producer of hazel nuts in North America, so we can get the cracked hulls here. It is sold as ground cover or mulch and is pretty pricey, but the hulls last almost indefinitely if that is what you are looking for. They are lightweight however, and aren’t suited to slopes or areas of wind or water eddies. Since they resist decomposition, they do not supply any nutrients to the soil, and thus, have no effect on soil pH.

How about using black walnut nut hulls as mulch? Black walnut trees have large concentrations of juglone and hydrojuglone (converted to juglone by some plants), which is toxic to many plants. Juglone concentrations are highest in walnut buds, nut hulls and roots but are also found in lesser quantity in leaves and stems. Even after composting, they may release juglone, so the question of using black walnut hulls as mulch is no. Although there are some plants that tolerate juglone, I say, why risk it?

A relative of the black walnut, the hickory, also contains juglone. However, the levels of juglone in hickory are much less than in black walnuts and are, therefore, safe for use around most plants. Hickory nuts in the compost pile, when properly composted, render the toxin ineffective. To help them break down more rapidly, it’s a good idea to crush them with a hammer before putting the nuts in the compost pile.

Keep in mind that all nut hulls take some time to break down. Breaking them into smaller pieces will help the decomposition process speed up, especially if you are using it as a top dressing and are concerned about any jagged edges that can damage delicate seed starts or the like. Of course, you can also always use a sieve to separate any big chunks of hull or don’t worry about it if using the compost as a soil amendment since it’s going to get dug in anyway.

Otherwise, I have not heard of any major issues regarding nut shell garden mulch, so toss those shells in!