Popular Legume Plants: What Are The Different Types Of Legumes 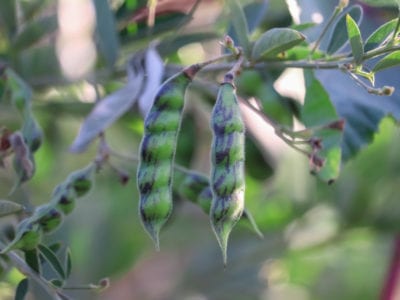 Beans and peas are two of our most common vegetables and provide an important source of vitamins and protein. They are classified, along with many other plants, as legumes. What is a legume? There are many types of legumes, most of which produce a pod that splits evenly in half. Legume cover crops are important nitrogen-fixing plants for soil health. This important legume info is crucial to gardeners and farmers where over planting depletes soil nutrients.

What is a Legume?

The family of legumes is Leguminosae. Legumes are found in most areas of the world and are fast growing and inexpensive food crops. Domesticated legume crops have been in human cultivation for more than 5,000 years.

Legumes encompass a wide range of edible nuts and vegetables. There are also legume plants that are not edible but have many of the same benefits for soil health. Legume pods easily break into two equal hemispheres, but not all legumes produce pods. Some, such as clover and alfalfa, are edible forage for cattle and other herbivores.

Legume pods are high in protein and have a low glycemic index. They substitute for animal fats in vegetarian diets and have low fat properties. Legumes are also a rich source of fiber. As a result, both pod and forage legumes have been in human cultivation for centuries. Farmers have long known that legume plants improve soil conditions.

The range of legume plant forms includes vine types to creeping groundcovers. All legumes are flowering and most have a flower that produces a thickened petal or keel that is formed by two petals that fuse together.

Beans and peas are not the only legumes. Legume cover crops may be alfalfa, red clover, fava, vetch, or cowpeas. They store nitrogen in nodules on the roots. The plant harvests nitrogen gas from the air and combines it with hydrogen. The process creates ammonia, which is converted by bacteria into nitrates, a usable form of nitrogen.

Once the plants are tilled into the soil, they release the nitrogen into the earth as they compost. This improves the soil and provides supplemental nitrogen that was removed by other plant’s growth.

Legume cover crops are valuable for the home gardener as well as the farmer. They also help prevent soil erosion and provide food for wildlife.

The most popular legume plants are peas and beans. Pole or bush beans provide long slender pods, while peas may be shell or edible pods. Stringless varieties of beans are easier to eat and snow or sugar peas have such soft shells that the entire pea is delicious eaten whole.

Some beans are meant to be shelled and the small ovaries inside dried. These are kidney, cranberry, and black beans, among others.

Outside of these popular legume plants, there are also other types of legumes. There are 18,000 species of plants in the family. The tipu tree, Moreton Bay chestnut, Acacia, and Albizia are all forms of legumes from around the globe. Even the common peanut is a member of the legume family.