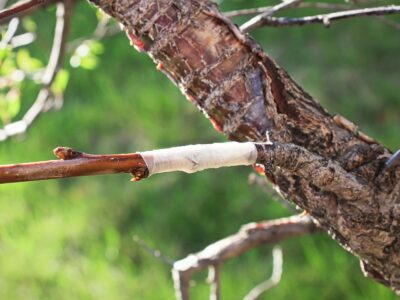 Getting Comfortable with Grafting

Grafting is the process of joining two pieces of material from two different plants together so that they grow to form a single composite plant. Like rooting cuttings, grafting is a form of asexual plant propagation. Many gardeners who are comfortable with cuttings may hesitate to try their hand at the ancient propagation practice of grafting.

Generally, gardeners try to combine a scion with desirable fruiting or ornamental characteristics with a hardy or pest resistant rootstock to create a more ideal plant. New “composite” plants created by grafting will produce a shoot system (branches, foliage, flowers, and fruit) that is a genetic copy of the scion’s parent plant.

Advantages of Whip and Tongue Grafting

Nobody can dispute that “whip and tongue” is a curious name for a grafting method, but the reason for the name becomes clear as you understand how it works. Ordinary grafting cuts both the scion and the rootstock on the diagonal, then fixes them together, cut sections touching, so that they can grow together.

In whip and tongue grafting, the gardener makes long, slanted cuts as well on both the scion and rootstock, but also shorter cuts. This creates “tongues” on each piece of plant that interlock, resulting in a tighter, more secure fit than regular grafting. Whip and tongue grafting works best when the scion and the rootstock are the same diameter, no bigger than ½ inch (1 cm.).

All grafting should be done with a sharp grafting knife, sharpened or beveled on one side for flatter cuts. This means greater surface area contact between cut surfaces. The knife must be razor sharp.

You’ll also need a few more tools, including materials used to hold the scion to the rootstock until the cambium grows together to join them. These materials can be any of several products including masking/grafting tape, orange shellac, rubber band strips, Buddy Tape, grafting wax, or tar.

The ideal time to graft is in late winter to early spring, from February to early April before growth starts. However, take the scion graftwood some months earlier while the shrub or tree is fully dormant. Each scion should be one year old wood some 6 inches (15 cm.) long that contains several buds.

Let’s use as an example whip and tongue grafting apple trees. The scion will be taken from a cultivar with fruit that you like and want to have more of. The rootstock will be a small sapling currently growing in your home orchard, or else a branch growing from one of your apple trees. Remember that the growing part is the rootstock, not the wood you cut from it.

Printer Friendly Version
Read more about Grafting
<Previous
Did you find this helpful? Share it with your friends!
FacebookTweetPinEmail
Related Articles
Newest Articles
You might also like…
Additional Help & Information