What Is Agar: Using Agar As A Growing Medium For Plants 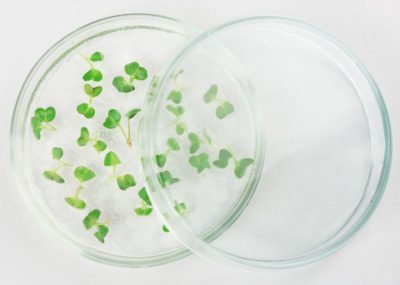 Botanists often use agar to produce plants in sterile conditions. Using a sterilized medium such containing agar allows them to control the introduction of any diseases while rapidly accelerating growth. What is agar? It is created out of plants and acts as a perfect stabilizing or gelling agent. Other items are also added to the agar to give new plants vitamins and sugar and sometimes hormones or antibiotics.

You may remember agar from your high school biology class. It can be used to grow viruses, bacteria, and even plants. This nutrient rich material actually comes from a species of algae. It is transparent, which allows the grower to view the roots of new plants. Agar is also used in some foods, fabric, and in cosmetics.

Agar has been part of scientific study for decades, if not longer. The material comes from red algae, which have been harvest in areas such as California and eastern Asia. The algae are boiled and then cooled to a thick paste. Agar as a growing medium is more useful than cooking gelatin but has a similar consistency.

It is not eaten by bacteria, which makes it more stable than regular gelatin. There are many different types of agars, but plain nutrient agar is the one that doesn’t grow a particular bacterium. This makes it a good base medium for germinating plants with agar. In a comparison of agar and soil, agar reduces bacterial introductions while soil may actually favor certain bacteria.

Why Use Agar as a Growing Medium?

Instead of soil, using agar for plant growing creates a more hygienic medium. The differences between agar and soil are vast, but the biggest are that agar is semi-solid, making it easy with which to work and necessary ingredients such as nutrients and vitamins can be added in exacting amounts.

It is also transportable, and you can work with very small tissue samples. Agar has been found useful for orchid culture and other specialized plant reproduction in sterile conditions. As an added bonus, germinating plants with agar produces very rapid growth as compared to soil starting.

You can purchase agar powder for plants at many online retailers. You simply boil water and add the amount recommended and stir it well. The mixture needs to cool to at least 122 degrees F. (50 C.) until it can be safely handled. The material will gel at 100 degrees F. (38 C.), so have sterile containers ready to pour in the cooling medium.

In about 10 minutes, the agar is solid and should be covered to prevent introduction of pathogens and foreign material. Tweezers of pipettes are useful for transferring the seed or tissue to the prepared agar. Cover the container again with a clear lid and place in a brightly lit, warm area for most plants. Germination varies by species but is generally twice as fast as other germination methods.

Several companies are already developing containerized agar as a growing medium for plants. It may even become the wave of the future.