What Is A Cotyledon: When Do Cotyledons Fall Off 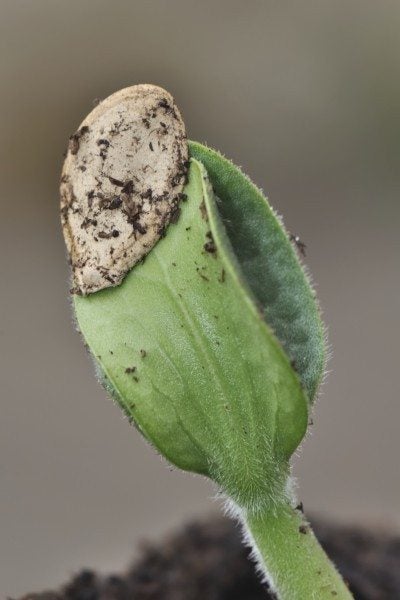 Cotyledons may be one of the first visible signs a plant has germinated. What is a cotyledon? It is the embryonic part of a seed which stores fuel for further growth. Some cotyledons are seed leaves which fall off the plant within a few days. These cotyledons on plants are photosynthetic, but there are also hypogeal cotyledons which remain under the soil. These unique plant parts are a crucial step to plant emergence and food storage. Continue reading for more fascinating cotyledon plant information.

Cotyledons on Plants and Classifying

You can study cotyledons by viewing a split peanut. The cotyledon is the little bump at the top of the half nut and will sprout in ideal conditions. The cotyledon forms at the crest of the endosperm, which carries enough plant nutrients to jump-start the sprouting process. The photosynthetic cotyledons will look quite dissimilar from the true leaves and only last a short time.

When viewing a seed, it is often quite easy to see what a cotyledon is. While this is the case with a peanut, other seeds do not have the little nub that indicates where the leaves will sprout. Scientists use the number of cotyledons to classify plants.

A monocot has only one cotyledon and a dicot has two. Corn is a monocot and has an endosperm, embryo, and single cotyledon. Beans can be easily split in half and each side will bear a cotyledon, endosperm, and embryo. Both forms are considered flowering plants, but the blooms are not always evident.

When a dicot emerges from the soil, it has two seed leaves whereas a monocot will bear only one. Most monocot leaves are long and narrow while dicots come in a wide range of sizes and shapes. Flowers and seed pods of monocots tend to come in parts of three while dicots have three or five petals and seed heads come in a host of forms.

When Do Cotyledons Fall Off?

Photosynthetic cotyledons remain on the plant until the first true leaves appear and can begin to perform photosynthesis. This is generally just a few days and then the seed leaves fall off. They remain to help direct the energy stored in the seed to new growth, but once the plant is self-sufficient, they are no longer needed.

Similarly, the hypogeal cotyledons that remain under soil are also directing stored energy from the seed and will wither when no longer needed. Some plants’ cotyledons persist for up to a week, but most are gone by the time the first two true leaves are evident.