What Is Vivipary – Reasons For Seeds Germinating Prematurely 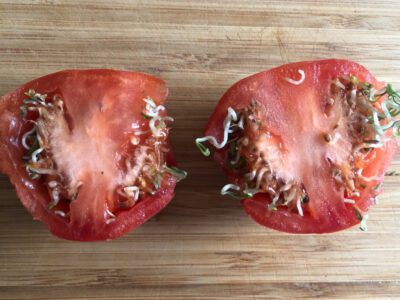 Vivipary is the phenomenon that involves seeds germinating prematurely while they are still inside or attached to the parent plant or fruit. It occurs more often than you might think. Keep reading to learn some vivipary facts and what to do if you see seeds germinating in the plant instead of the ground.

What is vivipary? This Latin name literally means “live birth.” Really, it’s a fancy way of referring to seeds germinating prematurely when they are still inside or attached to their parent fruit. This phenomenon occurs frequently on ears of corn, tomatoes, peppers, pears, citrus fruits, and plants that grow in mangrove environments.

You are most likely to encounter it in tomatoes or peppers that you’ve bought in the grocery store, especially if you’ve left the fruit sitting out on the counter for a while in hot weather. You might be surprised to cut it open and find tender white sprouts inside. In tomatoes, the sprouts appear as tiny white worm like things, but in peppers they’re often thick and sturdy.

How Does Vivipary Work?

Seeds contain a hormone that repress the germination process. This is a necessity, as it keeps the seeds from germinating when conditions aren’t favorable and missing their shot to become plants. But sometimes that hormone runs out, like when a tomato sits around on the counter for too long.

And sometimes the hormone can be tricked into thinking conditions are right, especially if the environment is warm and moist. This can happen on ears of corn that experience a lot of rainfall and collect water inside their husks, and on fruit that doesn’t get used right away during hot and humid weather.

Not at all! It may look creepy, but it doesn’t really affect the quality of the fruit. Unless you’re looking to sell it commercially, it’s more of a cool phenomenon than a problem. You can remove the sprouted seeds and eat around them, or you can turn the situation into a learning opportunity and plant your new sprouts.

They likely won’t grow into an exact copy of their parent, but they will produce some kind of plant of the same species that makes fruit. So if you find seeds germinating in the plant you were planning on eating, why not give it a chance to keep growing and see what happens?