What Are Loppers Used For: Tips On Using Garden Loppers For Pruning 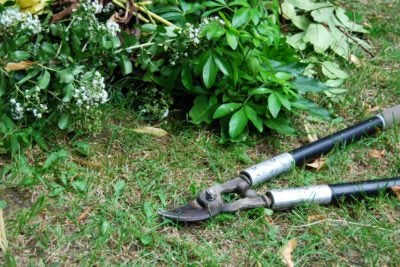 Gardening is easier when you choose the right tool for a particular task, and it’s hard to get by without loppers. What are loppers used for? They are tough pruners used to clip thicker woody stems as well as thinner stems that are hard to reach. If you want to start using garden loppers, read on. You’ll find tips on when to use loppers and how to use loppers.

What are Loppers Used for?

Almost every gardener owns a hand pruner, also called hand shears. That’s the scissor-sized tool to clip thinner branches or stems, deadhead flowers, and take off soft shoots. So, what are loppers used for? Loppers are super-sized pruners. If a stem is thicker than a larger sized pencil, cutting it with a hand pruner could damage the light tool. When you are using garden loppers, with their long handles, you have a lot more leverage to prune heftier branches. You also have a longer reach.

Knowing when to use loppers can save you time, energy, and the cost of a new pair of hand pruners. Long-handled loppers are the perfect tool for clipping woody stems between ½ and 1 inch (1-2.5 cm.) in diameter.

Using garden loppers gives you high leverage without much effort on your part. On the other hand, you’ll need to use two hands to make the cuts and the tool is heavier than pruners.

How to Use Loppers

Using loppers efficiently takes a little practice, but once you’ve got the hang of it, you’ll wonder how you managed without them. When you are learning how to use loppers, you want to think about both the ease and accuracy of a cut. To get the best results from using garden loppers, figure out exactly where you want the cut, then line up the blade itself with that location.

Another good tip is to be sure to open the blade and get the branch deep inside it prior to cutting. If you let yourself snip with the loppers, like you might with scissors, your hands will get tired very quickly. Once you place the lopper blade correctly, it’s time to cut. Close the loppers around the branch in one smooth motion.

The most popular garden loppers are bypass loppers. Like bypass pruners, these have one blade that slices past a thick base as you close the tool.

The second are called anvil loppers. The blade in a set of anvil loppers connects with the fat lower base at the end of the cut. This makes them easier to use but less precise than bypass loppers.