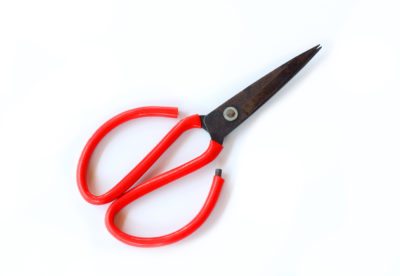 What are Garden Scissors Used for?

If you read pretty much anything by your favorite gardening guru about which tools are must-haves for the garden, you will find no mention of scissors. I strongly disagree. Perhaps, my adoration for my garden scissors stems from a childhood memory of snipping dandelion heads from the lawn. The adults didn’t have time to mow, so I was paid a penny for each dandelion head.

As I’ve gotten older, the trusty scissors have stuck with me along with my bypass, anvil, and ratchet shears, oh, and the lawn edger. Yes, all of these tools have their place and I use them frequently, but for small, quick jobs, you will find me using scissors in the garden.

How to Use Scissors in the Garden

The scissors I use for the garden aren’t anything special, just an old pair of plain household scissors. I carry them around in a bucket with other tools and twine. What kind of uses do I find for garden scissors? Well, speaking of twine, I find that scissors cut it better and faster than other implements. I also use the scissors to remove the twine that was holding up my clematis or supporting my now-dead tomato plants.

You can use scissors to deadhead flowers, harvest veggies, and snip herbs. You can’t beat scissors for cutting seed packets or potting soil bags. Scissors are invaluable when you need to get into the impenetrable packaging of the new pair of hand pruners or of the bonus package of gardening gloves. Scissors save the day when attempting to open a box of drip line emitters.

Probably the number one time you will find me using scissors in the garden is after I’m done mowing and edging. There is a particular area of my yard that is not accessible or at least not without great difficulty in mowing or edging. So every week, I need to get down on my hands and knees and with my trusty scissors to tidy the area up. I’ve even been known to edge the front lawn with scissors when I run out of line for the electric trimmer. And, you know, I think that did a better job too!

As you can see, there are many uses for scissors in the garden, be it those trusty household types of scissors specifically sold for use in horticulture.