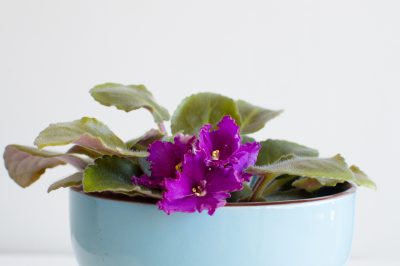 Also frequently known as root rot, crown rot develops when an African violet’s growing medium is too wet. There’s more at work than decomposition, however. Crown rot is a disease, and the disease is caused by a fungus called Pythium ultimum.

The fungus thrives in wet conditions, spreading through the growing medium and feeding on the plant’s roots and crown. If the fungus spreads too far (and the wetter it is, the quicker it spreads), it will kill the plant.

Crown rot on African violet plants is evident in roots that become dark and soft. Unfortunately, the roots are hidden underground, so you won’t be able to notice this telltale symptom. Even more unfortunate, the most obvious above ground sign of African violet crown rot is leaves that wither, turn yellow, and eventually fall off.

This is unfortunate because it’s basically indistinguishable from the sign of an African violet that’s not getting enough water. Many African violet owners misread these symptoms and wind up overwatering a plant that’s already suffering from too much water. The best way to avoid this is to pay attention to soil moisture.

Since there really isn’t an effective African violet crown rot treatment, if your plant is already infected, dispose of it and its growing medium, and sterilize its pot before using it again.

Printer Friendly Version
Read more about African Violets
<PreviousNext>
Did you find this helpful? Share it with your friends!
FacebookTweetPinEmail
Related Articles
Newest Articles
You might also like…
Additional Help & Information