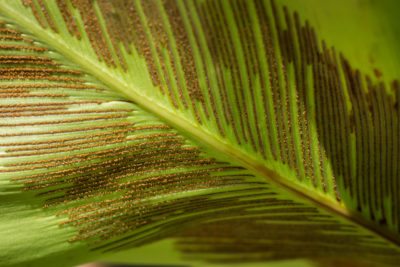 The bird’s nest fern is a popular, attractive fern that defies the usual fern preconceptions. Instead of the feathery, segmented foliage usually associated with ferns, this plant has long, solid fronds that have a crinkly appearance around their edges. It gets its name from the crown, or center of the plant, that resembles a bird’s nest. It’s an epiphyte, which means it grows clinging to other objects, like trees, rather than in the ground. So how do you go about propagating one of these ferns? Keep reading to learn more about how to collect spores from ferns and bird’s nest fern spore propagation.

Bird’s nest ferns reproduce through spores, which appear as little brown spots on the undersides of the fronds. When the spores on a frond are fat and a little fuzzy looking, remove a frond and place it in a paper bag. Over the course of the next few days, the spores should fall from the frond and collect in the bottom of the bag.

Bird’s nest spore propagation works best in sphagnum moss, or peat moss that has been supplemented with dolomite. Place the spores on top of the growing medium, leaving them uncovered. Water the pot by placing it in a dish of water and let the water soak up from the bottom.

It’s important to keep your bird’s nest fern spores moist. You can cover your pot with plastic wrap or a plastic bag, or leave it uncovered and mist it daily. If you do cover the pot, remove the cover after four to six weeks.