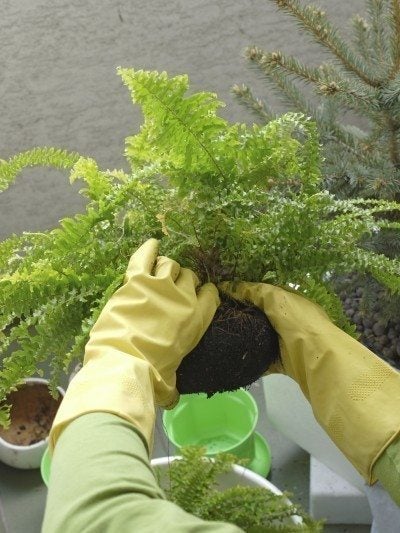 The Boston fern (Nephrolepis exaltata ‘Bostoniensis’), often referred to as a sword fern derivative of all cultivars of N. exaltata, is a houseplant popularized during the Victorian era. It remains one of the quintessential symbols of this time period. The commercial production of the Boston fern began in 1914 and includes around 30 tropical species of Nephrolepis cultivated as potted or landscape ferns. Of all fern specimens, the Boston fern is one of the most recognizable.

Boston fern runners, or stolons, may be removed from a mature parent plant by taking the offset whose runners have formed roots where they come into contact with the soil. Thus, the Boston fern shoots create a new separate plant.

Historically, the early nurseries of central Florida grew stock Boston fern plants in beds of cypress-covered shade houses for the eventual harvest of the Boston fern runners from older plants to propagate new ferns. Once harvested, these Boston fern shoots were wrapped in newspaper bare rooted or potted, and shipped out to the Northern reaches of the market.

In this modern era, stock plants are still kept in climate and environmentally controlled nurseries wherein the Boston fern runners are taken (or more recently, tissue-cultured) for propagating of Boston fern plants.

When propagating Boston fern plants, simply remove the Boston fern runner from the base of the plant, either with a gentle tug or cut with a sharp knife. It isn’t necessary that the offset have roots as it will easily develop roots where it comes into contact with soil. The offset may be planted immediately if removed by hand; however, if the offset was cut from the parent plant, set it aside for a couple of days to allow the cut to dry and heal over.

Boston fern shoots should be planted in sterile potting soil in a container with a drainage hole. Plant the shoot just deep enough to remain upright and water lightly. Cover the propagating Boston ferns with a clear plastic bag and place in bright indirect light in an environment of 60-70 F. (16-21 C.). When the offshoot begins to show new growth, remove the bag and continue to keep damp but not wet.

Propagation may also be achieved by dividing Boston fern plants. First, allow the fern roots to dry out a bit and then remove the Boston fern from its pot. Using a large serrated knife, slice the fern’s root ball in half, then quarters and finally into eighths.

If the fronds look a bit sickly, they may be removed to reveal the young emergent Boston fern shoots and fiddleheads. Keep moist but not wet (set the pot atop some pebbles to absorb any standing water) and watch your new Boston fern baby take off.

Printer Friendly Version
Read more about Boston Ferns
<PreviousNext>
Did you find this helpful? Share it with your friends!
FacebookTweetPinEmail
Related Articles
Newest Articles
You might also like…
Additional Help & Information