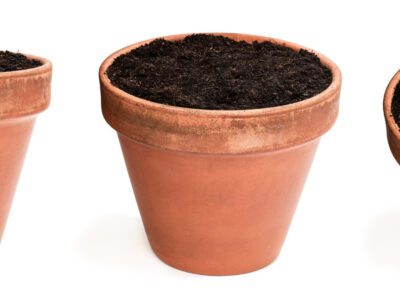 Since soil can harbor pests, diseases, and weed seeds, it’s always a good idea to sterilize garden soil before planting to ensure the most optimal growth and health of your plants. While you can go out and purchase sterile potting mixes to meet your needs, you can also learn how to sterilize soil at home quickly and efficiently.

Methods for Sterilizing Soil for Seeds and Plants

There are several ways to sterilize garden soil at home. They include steaming (with or without a pressure cooker) and heating the soil in the oven or microwave.

Steaming is considered one of the best ways to sterilize potting soil and should be done for at least 30 minutes or until the temperature reaches 180 degrees F. (82 C.). Steaming can be done with or without a pressure cooker.

If you’re using a pressure cooker, pour several cups of water into the cooker and place shallow pans of level soil (no more than 4 inches (10 cm.) deep) over top of the rack. Cover each pan with foil. Close the lid but the steam valve should be left open just enough to allow the steam to escape, at which time it can be closed and heated at 10 pounds pressure for 15 to 30 minutes.

Note: You should always practice extreme caution when using a pressure for sterilization of nitrate-rich soil, or manure, which has the potential of creating an explosive mix.

For those not using a pressure cooker, pour about an inch (2.5 cm.) or so of water into the sterilizing container, placing the soil-filled pans (covered with foil) on a rack over the water. Close the lid and bring to a boil, leaving it open just enough to prevent pressure from building up. Once the steam escapes, allow it to remain boiling for 30 minutes. Allow the soil to cool and then remove (for both methods). Keep foil on until ready to use.

Sterilizing Soil with an Oven

You can also use the oven to sterilize soil. For the oven, put some soil (about 4 inches (10 cm.) deep) in an oven-safe container, like a glass or metal baking pan, covered with foil. Place a meat (or candy) thermometer into the center and bake at 180 to 200 degrees F. (82-93 C.) for at least 30 minutes, or when soil temp reaches 180 degrees F. (82 C.). Anything higher than that can produce toxins. Remove from oven and allow to cool, leaving the foil in place until ready to use.

Sterilizing Soil with a Microwave

Another option to sterilize soil is to use the microwave. For the microwave, fill clean microwave-safe containers with moist soil– quart size with lids are preferable (no foil). Add a few ventilation holes in the lid. Heat the soil for about 90 seconds per every couple pounds on full power. Note: Larger microwaves can generally accommodate several containers. Allow these to cool, placing tape over the vent holes, and leave until ready to use.

Alternatively, you can place 2 pounds (1 kg.) of moist soil in a polypropylene bag. Put this in the microwave with the top left open for ventilation. Heat the soil for 2 to 2 1/2 minutes on full power (650 watt oven). Close the bag and allow it to cool before removing.