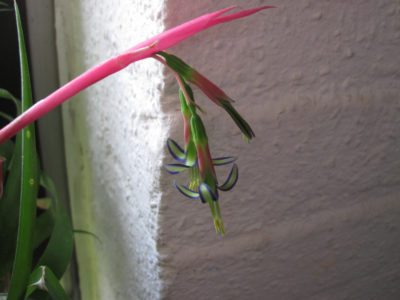 Image by Pick him!

Native to South America, queen’s tears is an epiphytic plant that grows primarily on trees but is also found growing on forest floors. It absorbs most of its moisture and nutrients through the flowers and leaves and not from the shallow roots.

To grow queen’s tears indoors, plant it in a container filled with potting mix formulated for bromeliads or orchids.

If you want to propagate queen’s tears for sharing, separate an offshoot from a mature plant with a sterile knife or razor blade. Plant the offshoot in its own pot. For best results, the offshoot should be at least one-third the height of the parent plant.

Place the plant in bright, indirect light throughout most of the year, but move it into light shade during the summer.

Queen’s tears bromeliads are relatively drought tolerant. Water frequently during the summer, providing just enough to keep the soil slightly moist but never drenched. Like most bromeliads, you can also fill upward-facing cups with water. Water sparingly throughout winter, early spring, and autumn – just enough to keep the soil from becoming bone dry. Mist the foliage lightly every few days.

Add a water-soluble fertilizer to the irrigation water once every other week during the summer. Use the mixture to moisten the soil, fill the cups, or mist the leaves. Fertilize the plant only once per month during the remainder of the year.

Queen’s tears bromeliads usually flower in spring, but stubborn plants can be prompted to bloom by adding a healthy pinch of Epsom salts to the water one time in early spring.