How To Grow Tillandsia Cyanea Or Pink Quill Plant 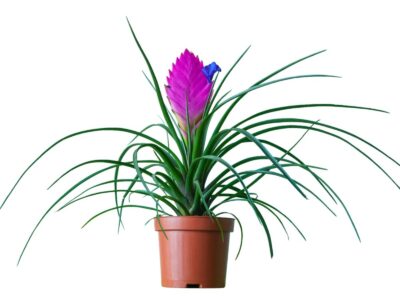 Bromeliads are a popular choice for both indoor and outdoor gardeners. Known for their purported ability to purify the air and remove pollutants, bromeliads are often praised for their usefulness and ease of growth. With over 2,000 different species within the family itself, there may truly be a plant to suit the needs of nearly any grower. As most species are considered to be tropical, these plants grow best in regions that do not experience frost or prolonged periods of cool weather. Growers beyond those zones, however, have found success in overwintering the plant indoors throughout the coldest portions of the year. One type, called the ‘Pink Quill’ bromeliad, is often grown for its uniquely shaped bracts and colorful blooms.

What is a ‘Pink Quill’ Air Plant?

Also known as Wallisia cyanea or Tillandsia cyanea, pink quill plants are a dependable tropical perennial. Native to Ecuador, the small evergreen plant grows best in USDA growing zones 9 through 12. Throughout the gardening season, quill bromeliads produce rosettes of thin grass-like foliage. Though the plant is relatively short at maturity, its foliage is known to sprawl and reach impressive widths. Masses of leaves range in color from glossy green to attractive shades of silver and gray.

Pink quill bromeliads are an epiphyte, or an air plant. This means that the plant is most commonly found growing on another species. Rather than drawing water and nutrients from the soil these plants are able to do so from rainwater, surrounding plant matter, or even the air. Though the flowers of the pink quill are relatively simple in form and structure, the plant does produce bracts that are exceptionally showy.

Most pink quill bromeliads will begin to bloom in late winter and continue through early spring. During this time, indoor bloom can also be achieved, provided that adequate growing conditions have been met. As an air plant, growers should ensure that specimens are situated in planters or containers that are specifically made for the growth of epiphytes. Fir bark mixes, or those which have been formulated for use with bromeliad plants or orchids, are often among the best options at planting time. Many indoor gardeners have also found success in growing pink quills through the use of large terrariums. Pink quill bromeliads will not begin to bloom until well established, often taking up to seven years to flower from seed.

Once established in planters, these plants require a location that receives bright, indirect sunlight. Throughout winter, pink quill will appreciate consistent indoor temperatures. As with most houseplants, growers should make certain that the plants are kept away from cold drafts. Proximity to heating vents may also be problematic, as maintaining proper humidity will be key to overall plant health. Most growers agree that these air plants will require frequent misting, usually at least two to three times per week. Gardeners should avoid wetting the growing medium directly, as this may lead to problems with root or crown rot. Frequent monitoring for common indoor pests, like aphids, can also help to keep the plant healthy and looking its best.

Printer Friendly Version
Read more about Bromeliads
<Previous
Did you find this helpful? Share it with your friends!
FacebookTweetPinEmail
Related Articles
Newest Articles
You might also like…
Additional Help & Information