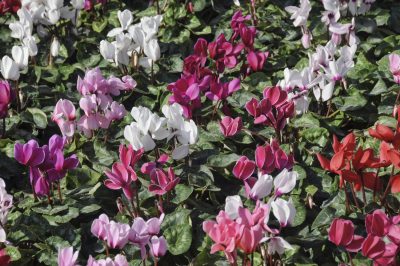 Many of us are familiar with cyclamen as a charming florist’s plant that brightens up the indoor environment during the gloomy winter months. What we may not realize, however, is that cyclamen, a cousin to the cheery little primrose, is actually native to the Mediterranean and surrounding areas.

Cyclamen heredifolium, also known as ivy-leaved cyclamen, is a robust species that tolerates relatively cold winters. In the United States, it has naturalized in parts of the Pacific Northwest. This autumn-flowering species, popular and easy to grow in the home garden, blooms in shades of pink or white tinged with pink. Grow C. heredifolium in zones 5 through 7.

Cyclamen varieties within this species include:

Cyclamen coum sports quarter-sized green or patterned, rounded, or heart-shaped leaves that typically appear in autumn. Small, bright flowers poke up through the foliage in midwinter. This species is hardy to USDA zones 6 and above.

Varieties of C. coum include several cultivars within the ‘Pewter Leaf’ group as well as the following:

Cyclamen graecum can be difficult to grow and often isn’t as vigorous as other varieties. However, this species is stunning, with velvety, deep green foliage in vivid colors and patterns. Tiny blooms, sometimes sweetly scented, rise just above the foliage in late summer and autumn. This tender variety is suitable for zones 7 through 9.

Cyclamen plant varieties within the C. graecum species include ‘Glyfada’ and ‘Rhodopou.’

Cyclamen mirabile is a charming fall bloomer that produces dainty little flowers and decorative, silver dollar-sized leaves in patterns of green and silver. This species grows in zones 6 through 8.

Printer Friendly Version
Read more about Cyclamen Plants
<PreviousNext>
Did you find this helpful? Share it with your friends!
FacebookTweetPinEmail
Related Articles
Newest Articles
You might also like…
Additional Help & Information