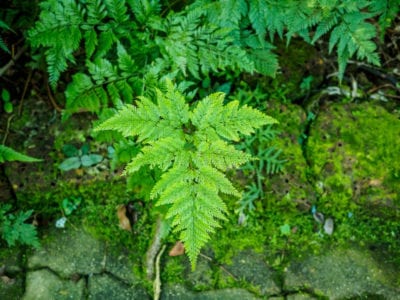 The rabbit’s foot fern plant gets its name from the furry rhizomes that grow on top of the soil and resemble a rabbit’s foot. The rhizomes often grow over the side of the pot, adding an extra dimension to the plant. Functional as well as decorative, the rhizomes absorb moisture and nutrients as they crawl across the moist soil.

Growing a rabbit’s foot fern houseplant in a hanging basket shows off the furry rhizomes to their best advantage. The rhizomes can grow quite long and over time they take on a spider-like appearance. Never bury the rhizomes under the soil, however, as this encourages rot.

As with any houseplant, care of rabbit’s foot fern includes providing adequate light, proper moisture and temperature, and regular fertilization. Even with the best of care, you may occasionally lose some of the older fronds. This is normal and not an indication that you have done anything wrong.

Rabbit’s foot ferns like bright but indirect sunlight, such as that found near a window with an eastern exposure.

During the day they like temperatures between 70 and 75 degrees F. (21-24 C.), and slightly cooler temperatures at night.

Water the plants lightly but often to keep the surface of the soil lightly moist. Daily misting helps keep the surface rhizomes from drying out. Every two weeks your rabbit’s foot fern care should also include watering the plant with a liquid houseplant fertilizer mixed at half strength.

Rabbit’s foot ferns need repotting about every two years, and the best time to repot is in spring. Mix regular potting soil half-and-half with sand to create an ideal medium for rabbit’s foot ferns. This is an excellent time to divide large plants.

Known botanically as Davallia fejeensis ferns, rabbit’s foot ferns have light, airy foliage compared to their cousins, the deer’s foot ferns (D. canariensis) and the squirrel’s foot ferns (D. trichomanoides). Light foliage doesn’t hold moisture as well as thick foliage, so the plants need frequent misting and an occasional shower to keep them from drying out.

A rabbit’s foot fern plant is very sensitive to chemicals. Avoid using leaf shine products and insecticides on the plant. A gentle shower keeps the fronds looking clean and fresh and also removes many of the insects that feed on the foliage. Tobacco smoke, scented candles, and most forms of air pollution also harm the plant.

Though it may need a little more maintenance than other plants in the home, growing a rabbit’s foot fern houseplant is a great way to enjoy this unusual, furry-footed oddity.