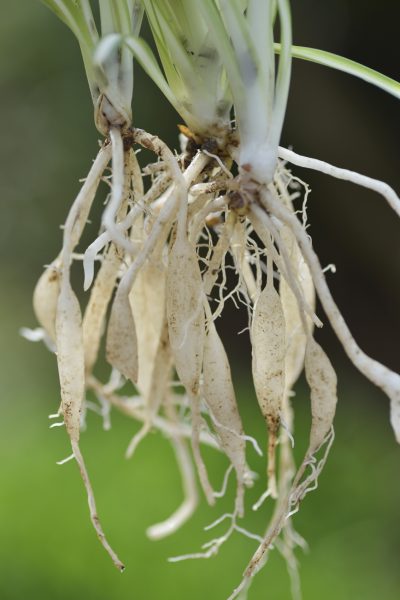 Spider plants form from thick tubers with a tangled root mass. They are native to tropical South Africa where they thrive in hot conditions. A spider plant with swollen roots may be pot bound, require more soil, or show evidence of a strange adaptation found in these and many other plants. A quick repotting should determine which the case is. As long as the tubers and roots are healthy, the plant is in no danger and will thrive.

Yes, a Spider Plant Has Tubers

Spider plants are old-fashioned indoor plants in the lily family, Liliaceae. These plants have been handed down from generation to generation and are important heritage plants to many families. The spiderettes that form on the ends of the spider plant stolons can be divided away and started as new plants. Thick roots will form quickly on the spiderettes, even if they are taken from the mother. However, a mature spider plant with swollen roots may also indicate a unique storage organ has formed on your plant.

Spider plants form dense, fleshy clusters of tubers. These are the source of the shoots and leaves and are companions of the root system. Tubers are white, smooth, twisting masses that may push to the surface of the soil. If most of the tuber mass is under the soil, one or two visible tubers shouldn’t cause the plant any harm.

When a spider plant has tubers in numbers that are highly visible, it may be time for a new pot or simply a topping of good soil. Over time, watering can flush some of the soil from the container making the level low. When repotting, wash the thick spider plant roots gently before nestling them into the soil.

The spiderettes on the ends of spider plant stolons will form fat roots. This is natural and, in the wild, the babies would simply root a bit away from the mother. In this way, the plant spreads vegetatively. Sometimes, stressed plants can form tuber-like water storage organs. This is a natural adaptation and useful in their native region.

Other organs which appear to be tubers are the fruit. It is very unusual for a spider plant to flower and even more unusual for them to produce fruit, as it is usually aborted. If the plant produces fruit, it will appear as leather, 3-lobed capsules.

Spider plants are in the lily family and are closely related to daylilies, whose roots are edible. Are spider plant roots edible? There seems to be some evidence that the tubers are not toxic but can cause problems in small animals in large doses. Of course, almost anything can be toxic in huge amounts as compared to body size.

It’s probably wise to leave the tubers untouched and enjoy the plant, but if you are wildly curious, check with your local poison control center to verify that the plant is not on the list of concerns.

The beauty of the plant will endure more surely if you leave those thick spider plant roots and tubers alone.

Printer Friendly Version
Read more about Spider Plants
<PreviousNext>
Did you find this helpful? Share it with your friends!
FacebookTweetPinEmail
Related Articles
Newest Articles
You might also like…
Additional Help & Information