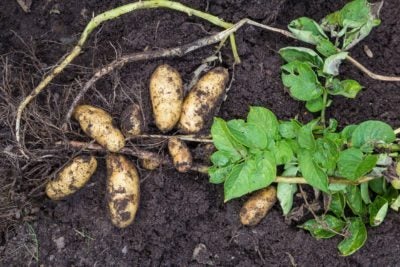 In horticulture, there is certainly no shortage of confusing terms. Terms like bulb, corm, tuber, rhizome, and taproot seem to be especially confusing, even to some experts. The problem is the words bulb, corm, tuber and even rhizome are sometimes used interchangeably to describe any plant that has an underground storage unit that helps the plant survive periods of dormancy. In this article, we will shed some light on what makes a tuber a tuber, what are tuberous roots, and how tubers differ from bulbs.

What is a Tuber?

The term “bulb” is all too often used to describe any plant that has a fleshy underground nutrient storage structure. Even the Meriam-Webster dictionary is vague on how tubers differ from bulbs, defining a bulb as: “a.) a resting stage of a plant that is usually formed underground and consists of a short stem base bearing one or more buds, enclosed in overlapping membranous or fleshy leaves and b.) a fleshy structure such as a tuber or corm resembling a bulb in appearance.”

As well as defining tuber as: “a.) a short fleshy usually underground stem bearing minute scale leaves, each of which bears a bud in its axial and is potentially able to produce a new plant and b.) a fleshy root or rhizome resembling a tuber.” These definitions really only add to the confusion.

Tubers are actually swollen portions of underground stems or rhizomes that usually lie horizontally or run laterally beneath the soil surface or at the soil level. These swollen structures store nutrients for the plant to use during dormancy and promote new healthy growth in spring.

What Makes a Tuber a Tuber?

Unlike corms or bulbs, tubers do not have a basal plant from which new shoots or roots grow. Tubers produce nodes, buds, or “eyes” all over their surface, which grow up through the soil surface as shoots and stems, or down into the soil as roots. Due to their high nutrient content, many tubers, such as potatoes, are grown as food.

Tubers can be cut up into many different pieces, with each piece bearing at least two nodes, and planted individually to create new plants that will be exact replicas of the parent plant. As tubers mature, new tubers may form from their roots and stems. Some common plants with tubers include:

One easy way to distinguish between bulb, corm, and tuber is by the protective layers or skin. Bulbs generally have layers or scales of dormant leaves, like onions. Corms oftentimes have a rough, husk-like layer of protection around them, such as crocus. Tubers, on the other hand, may have a thin skin protecting them, as potatoes do, but they will also be covered with nodes, buds, or “eyes.”

Tubers are also frequently confused with plants having edible roots, such as the carrot, but they are not the same. The fleshy portions of carrot that we eat are actually a long, thick taproot, not a tuber.

How Tubers Differ from Bulbs and Tuberous Roots

It would certainly be easy if we could just conclude that if it looks like an onion, it’s a bulb and if it looks like a potato, it’s a tuber. However, sweet potatoes complicate the matter even further, since these and plants like dahlias have tuberous roots. While “tuber” and “tuberous roots” are frequently used interchangeably, they, too, differ somewhat.

While tubers can be cut up to make new plants, tuberous roots are usually propagated through division. Many plants with tubers can be short lived, which is fine, since we are usually growing them only to harvest the fleshy edible tubers.

Tuberous roots usually form in clusters and may grow under the soil surface vertically. Plants with tuberous roots may be long lived and grown mostly as ornamentals. As previously stated, they can usually be divided every year or two to make more plants.