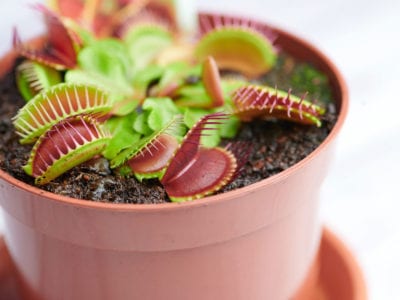 Carnivorous plants are endlessly fascinating. One such plant, the Venus flytrap, or Dionaea muscipula, is native to boggy areas of North and South Carolina. While the flytrap photosynthesizes and garners nutrients from the soil just as other plants, the fact is that boggy soil is less than nutritious. For this reason, the Venus flytrap has adapted to ingesting insects to round out its need for nutrients. If you are lucky enough to have one of these charmingly strange plants, you may have encountered some Venus flytrap problems – namely getting a Venus flytrap to close.

Probably the biggest reason your Venus flytrap does not snap shut is that it’s exhausted, sort of. The leaves of the flytrap have short, stiff cilia or trigger hairs. When something touches these hairs enough to bend them, the dual lobes of the leaves close, effectively trapping the “something” inside in less than a second.

There is a lifespan for these leaves, however. Ten to twelve times of snapping shut and they cease to function as trapping leaves and remain open, functioning as photosynthesizers. Chances are good that a store-bought plant has already been jostled in transit and played with by any number of potential buyers and are just plain done. You will have to wait patiently for new traps to grow.

It is also possible that the reason your Venus flytrap doesn’t snap shut is that it’s dying. Blackening leaves may signal this and are caused by bacteria, which may infect the trap if it hasn’t completely closed when feeding, as when an overly large bug is caught and it can’t shut tightly. A complete seal of the trap is needed to keep the digestive juices in and bacteria out. A dead plant will be brown-black, mushy, and have a rotting odor.

Getting a Venus Flytrap to Close

If you feed your Venus flytrap a dead insect, it will not struggle and signal the cilia to close. You have to manipulate the trap gently to simulate a live insect and allow the trap to snap shut. The trap then secretes digestive juices, dissolving the soft innards of the bug. After five to 12 days, the digestive process is completed, the trap opens and the exoskeleton is blown away or washed out with the rain.

Getting your flytrap to close may be a matter of temperature regulation. Venus flytraps are sensitive to the cold which will cause the traps to close very slowly.

Keep in mind that the hairs on the traps or lamina have to be stimulated for the trap to shut. At least one hair must be touched twice or several hairs in rapid succession as when an insect is struggling. The plant can distinguish between a living insect and say raindrops, and will not close for the latter.

Lastly, like most plants, the Venus flytrap lies dormant during the fall through to the following spring. During this time period, the trap is in hibernation and has no need for additional nutrition; hence, the traps do not respond to stimulus. The overall green color in the leaves indicates the plant is simply resting and fasting and not dead.