Thatch Removal With Fire: Is Burning Of Grass Safe 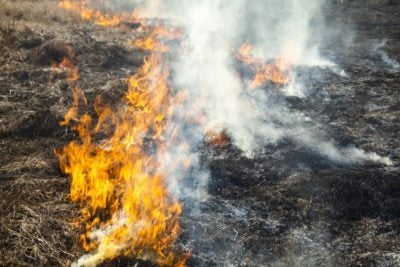 No doubt in your travels you have seen people conducting controlled burnings of prairies or fields, but you may not know why this is done. Generally, in prairie lands, fields, and pastures, controlled burns may be done annually or every few years to renew and revive the land. In some circumstances, you may also see lawn care workers using fire to get rid of thatch. Thatch removal with fire is a controversial subject, which we will discuss in this article. Continue reading to learn more about burning grass to remove thatch.

Thatch is a fibrous you, tan-brown organic matter that builds up in lawns or field between the soil and the grass blades. Despite the common misconception that thatch is a buildup of grass clippings and other debris, it is actually comprised of living surface roots, stems, and runners.

Lawn clippings and other organic debris usually decay and break down quickly rather than accumulating on the soil surface. The surface roots and runners, known as thatch, are usually caused by frequent, shallow watering, excessive use of nitrogen fertilizer, infrequent mowing, poor soil texture (clay, sand, compacted), poor soil aeration and/or excessive use of pesticides.

Certain grasses are more prone to thatch buildup than other grasses, such as:

For this reason, burning of grass has become a rather common practice in the southeastern U.S. This is a much-debated practice amongst lawn care specialist, however.

Is Burning of Grass Safe?

Using fire to get rid of thatch is generally not recommend because of safety concerns and fire hazards. Fire, even controlled ones, can be unpredictable and quickly get out of hand. Most experts will recommend mechanical or chemical de-thatching, regular soil aeration, power raking, scalping, vermiculture, and proper lawn care practices (deep, infrequent watering, frequent mowing, and slow-release nitrogen fertilizer), rather than thatch removal with fire.

Laws about burning thatch and other garden matter differ from place to place, so it is important to check with your local fire department before burning anything. Some locations may have burning bans, while other places may require permits or have specific times when burning is allowed. To avoid hefty fines, be sure to do your homework about burning and fire ordinances in your location. It is also a good idea to discuss your plans with neighbors, so they’ll know what to expect.

Before using fire to get rid of thatch, you will need to create a fire plan and prep the area. Usually, a fire line is created around areas to be burned. A fire line is a 10 to 12 foot (3-4 m.) strip around the burning area that is plowed or tilled with the intention of stopping the fire once it reaches this point.

You will also need to make sure to have plenty of available helpers on the day of the burn. If the fire gets out of hand, it will take more than one person to control it. Strategically place hoses connected to a water source around the burn zone to quickly put out the fire. Also, ensure that everyone has proper safety gear.

Proper timing is very important when burning grass. Thatch removal with fire is normally done in early spring, ideally after the danger of frost has passed but before spring green up. You also want to make sure you are burning thatch on a day and during hours when the grass is dry, humidity is low, and there is little to no wind. If wind speeds are 10 to 12 MPH or more, do not conduct a thatch burn.

Additionally, if you will be burning near roads, avoid times when traffic is high on the road, as heavy, dark smoke from burning grass can drift onto roads and cause accidents.

Burning thatch can be beneficial in many ways. It not only removes thatch buildup but can also kill off serious pests and diseases and adds readily available nutrients to the soil. However, do not use fire to remove thatch without proper preparation. Most importantly, never leave a fire unattended.