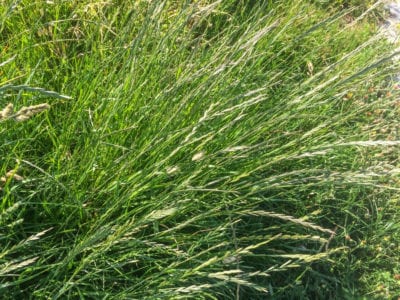 Annual ryegrass is a valuable, rapidly growing cover crop. It aids in breaking up hard soils, better allowing roots to absorb nitrogen. So, what is perennial ryegrass used for? Read on to learn more.

What is Perennial Ryegrass Used For?

Perennial ryegrass is also used for home lawns and other areas requiring attractive turf such as golf course fairways and tees or baseball fields. It wears well, germinates rapidly, and maintains a lush appearance. Other perennial ryegrass information states that it has the highest wear tolerance of all the cool season grasses and is forgiving of very high traffic, making it perfect for use around schools and in park settings.

All the above perennial ryegrass information lends it as the perfect candidate for overseeding winter dormant lawns and its rapid growth aids in weed suppression.

Perennial ryegrass is used in cool, temperate climates well suited to coastal regions with moderate temps throughout the year. It thrives in full sun but will do well in partial shade. It does not tolerate drought or long periods of extreme heat. Like all ryegrasses, it flourishes in fertile, well-draining soil, but perennial ryegrass handles wet soils better than other ryes.

Perennial ryegrass has a bunchgrass growth habit without rhizomes or stolons and perennial ryegrass care ranks between moderate and high maintenance depending upon environmental conditions. Seed at the rate of 6 to 9 pounds (3-4 kg.) of seed per 1,000 square feet (93 sq. m.) in the fall or use sod. Germination should take place between three and five days and mature turf will take hold within four to eight weeks.

This fine textured, rich green grass should be mowed when used as lawn cover between 1.5 and 2.5 inches (4-6 cm.) high. When planting perennial ryegrass to overseed warm season grasses, begin mowing in the spring and gradually reduce its height to encourage growth of the warm season grass.

Fertilize this ryegrass with 4 pounds (2 kg.) of nitrogen per 1,000 sq feet (93 sq. m.) per year during its active growth period– February through June or October through December. Water this grass often to a depth of 6 to 12 inches (15-31 cm.) unless used to overseed, in which case water deeply but less often.

All in all, perennial ryegrass is an excellent pastoral or turf choice of grass for cool weather regions.