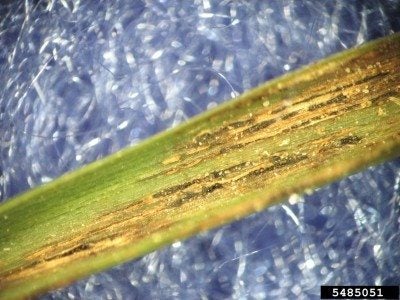 Turf grasses are prey to numerous pest and disease problems. Finding rust fungus in lawn areas is a common issue, especially where excess moisture or dew is present. Keep reading for more information on the control of rust on grass.

What is Lawn Grass Rust Fungus?

Rust is a fungal disease that occurs on turf grasses when their growth is slowed. This usually happens in late summer or early fall, during periods of dry weather or when the grass is low on nitrogen. Lawn rust can weaken the vigor of the grass and open it to other diseases and turf problems. Grass rust fungus spreads easily through its spores but rust fungus in lawns does not require fungicides in most cases.

Identification of Rust Fungus in Lawn

Grass rust identification can be done by pulling a couple of blades out of the turf. The blades will be coated with orange-red to yellowish brown dust or spores. The lawn rust begins with yellowing leaf blades and small yellowish spots which mature to orange, red, or brown coloring. The spores can be rubbed off the grass blades with a finger. Overall, patches of the grass will become thin and weak.

Many types of plants are susceptible to rust fungus, from ornamental plants to evergreens. Grass rust problems are very obvious due to the large amount of space the plant covers. The formation of the spores often occurs when there are cool nights with heavy dew and frequent rainfall. Warm, cloudy, humid conditions followed by bright hot sun also favor the formation of the spores. Basically, anytime the grass is not allowed to dry out after a period of six to eight hours, rust on grass begins to form. Grass rust problems also appear more frequently when thatch in lawns is too thick or mowing is infrequent.

Coated leaf blades with lawn rust fungus can minimize the ability of the grass to photosynthesize. The blades of grass are the collectors of solar energy, which is turned into carbohydrates or plant sugars to fuel the growth of the sod. When the leaves are excessively covered with spores, the photosynthetic action cannot be carried out efficiently and the fuel for good health and growth is not adequately collected.

Poor vigor and a susceptibility to pests and other diseases will follow high rust on grass infestations. In addition, the accumulation of spores create dust when mowing and may cling to shoes and lawn or garden equipment, increasing its spreading nature.

Control of Rust on Grass

There are many turf grass species (such as Kentucky bluegrass and ryegrass) that are resistant to rust fungus; but if replacing your sod is not an option, there are other control measures. In fact, most grass rust problems can usually be resolved with good maintenance and healthy practices.

Mow the lawn frequently to keep it at a moderate height. Also, be sure to rinse off lawn equipment to prevent the spread of disease. Rake and remove any thatch that becomes more than ½ inch (1 cm.) deep, as this minimizes air circulation and provides an ideal breeding area for spores.

Water early in the day so the grass has a chance to dry before the higher heat of the day occurs. Test your soil before fertilizing in fall and add nitrogen if necessary. September is the optimum time to fertilize your sod.

In most cases, applying a chemical control is not recommended or necessary as the grass will not die off. If the infection is severe, the grass can get an unattractive appearance. In some areas, controlling the environmental conditions is not possible, so the rust makes an annual appearance. In any of these cases, however, it is appropriate to apply a fungicide to prevent the spores from forming.