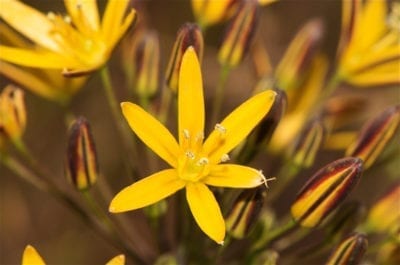 If you enjoy growing wildflowers in your garden, then the golden star plant is definitely one worth consideration. This little eye popper will bring much needed color early in the season. Keep reading for more information on how to grow Bloomeria golden stars.

The golden star (Bloomeria crocea) is a bulbous diminutive plant at just 6 to 12 inches (15-31 cm.) that is native in southern California. Named after the botanist Dr. Hiram Green Bloomer, the golden star is a geophyte, which means it grows from buds on an underground bulb. From April through June, it produces clusters of bright yellow, star-shaped flowers along hillsides, coastal sage scrub, grassland and chaparral edges, and in dry flats, often in heavy clay soil.

At the end of the stalk, the flowers spring fountain-like from the umbel. And, unlike most plants, the golden star has only one leaf that usually dies back before the flower blooms. During the summer, it goes dormant and dries out, thus, producing seeds which require three to four years to mature before they can flower.

During late spring and early summer, the golden star looks stunning planted either in masses or blended with other yellow or blue wildflowers in a garden. Since it is drought tolerant, it is suitable for xeriscaping, such as in alpine or rock gardens.

Later, as it goes dormant in summer, it frees up space for summer bloomers. The extra bonus of growing golden stars is that the six-petal flowers provide a source of food to early pollinators, such as bees and butterflies.

Before planting golden star, make sure you select a permanent location that has well-drained, rich, sandy soil and gets plenty of sun.

During its growing period, bloomeria flower care will include providing the plant with plenty of moisture. Golden stars respond well to plant ash fertilizer. Once the foliage dies, keep the plant quite dry until the autumn.

Bloomeria crocea is acclimated to a climate with mild, wet winters and hot, dry summers. It can be injured or die in temperatures below 25 degrees F. (-4 C.). Therefore, if you expect low temperatures, remove the bulb in autumn and store it in a dry area with the temperature around 35 degrees F. (2 C.).