Do Caladiums Bloom: What Is The Flower-Like Bud On Caladium Plant 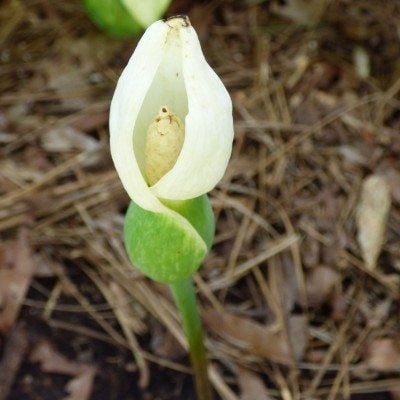 Caladiums are tropical to sub-tropical plants grown mainly for their exquisite, colorful leaves. These foliage plants occasionally have a surprise up their metaphorical sleeve. Blooming on caladium plants isn’t common, but tubers planted in favorable locations tend to produce small flowers. These inflorescences aren’t as impactful as a rose or dahlia but have their own charm and, sometimes, a strong pleasant scent. There are several schools of thought on what to do with caladium flowers. While some growers believe pinching them off helps force energy to the tubers, others leave the small blooms with no ill effect on the plant.

Big tropical looking foliage, deeply veined leaves, and an array of colors characterize caladiums. These plants in the Araceae family are classed as blooming plants. Do caladiums bloom though? Mature plants do develop a flower-like bud. This is a small spathe, a type of inflorescence found in the Aroid class of plants. The spathe is a far cry from what we usually deem as flowers, lacking petals and most other features of a typical bloom. They do have an interesting structure and are the reproductive system of the plant.

There is no shortage of forms of caladium, as there are over 1,000 cultivars on the market. That being said, there are two types of caladium commonly grown.

Caladiums are shade-loving plants and tend to burn in full sun locations. They need well-drained soil and should be lifted in winter in most zones. As a South American plant, caladiums need warm temperatures and will become dormant as cool seasonal air arrives.

You should dust off the soil and store tubers in a mesh bag or pair of panty hose in a dry location where temperatures are at least 60 degrees F. (15 C.).

Hardly anyone is going to purchase caladium for their flowers but they do produce an interesting bloom from larger tubers. As previously stated, the flower-like bud on a caladium is a spathe, which is a small modified leaf that sheathes the inner reproductive organs. Inside the curved spathe is a spadix. This is a rigid structure that holds the sexual organs of the plant.

The whole effect isn’t what one might call pretty but it is an interesting plant adaptation and one worth noting. In some species, such as calla lilies, the spathe/spadix is a magnificent form and considered the most attractive feature of the plant. In caladiums, the inflorescences are small, green to green yellow, and generally considered unattractive.

Blooming on caladium plants may take a few years to observe and, even then, you must part the leaves for a good look at these small flowers.

What to Do With Caladium Flowers

Caladiums spring from tubers, underground storage structures. These are similar to a swollen root and hold a cache of carbohydrate and embryonic material. The leaves gather solar energy and excess is stored in the tubers to help fuel the development of more leaves.

There is some speculation that the flowers rob the plant of energy, which it should be storing for future growth. In that regard, the flowers are usually cut off the plant. There actually is no evidence, however, that the plant will perform poorly if flowers are left to bloom.

Many inflorescences smell delightful and spread a tangy citrus scent around the area. The flowers are so small that they are certainly not detractors to the beauty of the foliage, so leaving them on should have no effect whatsoever.

Printer Friendly Version
Read more about Caladiums
<PreviousNext>
Did you find this helpful? Share it with your friends!
FacebookTweetPinEmail
Related Articles
Newest Articles
You might also like…
Additional Help & Information