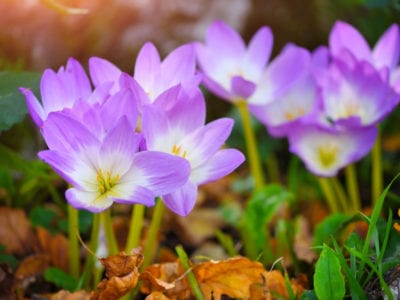 A charming addition to your fall flower bed, autumn crocus bulbs add unique color when much of the garden is getting ready for its long winter nap. Let’s learn more about growing autumn crocus.

What is Autumn Crocus?

The autumn crocus or meadow saffron is a member of the lily family (Liliaceae), not to be confused with its look alike, the spring-flowering crocus, which is a member of the Iris family (Iridaceae). Hailing from Europe, North Africa, and Asia, the autumn crocus is one species of around 70 in the genus Colchicum. This Colchicum has a rather unusual life cycle in that the colorful flowers appear as its name suggests, in early autumn.

All parts of autumn crocus plants are toxic with resulting symptoms from ingestion similar to those of arsenic poisoning. These symptoms occur within two to five hours due to the alkaloid colchicines contained in the autumn crocus bulbs.

The autumn crocus has a long history as a poison. Greek slaves were known to have eaten the plant to make them sick, and even to commit suicide. Besides its use as a poison, autumn crocus bulbs have long been utilized for medicinal purposes as well.

The plant was mentioned in the Ebers Papyrus, the oldest known medical text, prepared by the Egyptians around 1550 B.C. Thirty-five centuries later, we still find it in modern pharmacopeias, one of only 18 plants documented as having a history of medicinal value for such a long period of time.

Today the toxin alkaloid, colchicines, is used for the treatment of acute gout, a painful inflammation of the joints. The colchicines have also been found useful in the creation of new plant cultivars by interrupting the process of cell division and, thereby, creating polyploids enabling the new species to retain the genetic information of the parent plant.

Of course, when growing autumn crocus in the garden, its medicinal properties are not favored but rather the delightful blooms. The colorful blooms of the autumn crocus initially spring from the earth without any accompanying foliage. Short lasting, they fade within two or three weeks, and then lies dormant until the following spring, at which time three to eight, 1 foot (31 cm.) leaves appear and remain until early summer. In September, the autumn crocus emerges from its hibernation to bloom once again in a profusion of clustering flowers.

The autumn crocus develops from a corm, which should be planted in late summer or early fall, 2 to 4 inches (5-10 cm.) under the surface of the soil. The flowers of the autumn crocus tend to be delicate and should be protected, so situate them under low growing plants or even amid the lawn. Autumn crocus grows in a wide array of sites, from full sun to partial shade.

Once planted, there is very little required as far as autumn crocus care. While they may need some water during arid conditions, they’re basically maintenance free.

If your autumn crocus is planted among the grass, allow the foliage to die back before mowing.

Some autumn crocus varieties to look for are the purple-red C. agrippinum and the tulipesque blooms of C. speciosum, which are cream colored to begin with and gradually darken into their rosy purplish hues.

Other cultivars of note include:

An under used fall bloomer, autumn crocus plants are a terrific addition to the usual collection of chrysanthemums and asters favored by gardeners during the last of the growing season.

Printer Friendly Version
Read more about Crocus
<PreviousNext>
Did you find this helpful? Share it with your friends!
FacebookTweetPinEmail
Related Articles
Newest Articles
You might also like…
Additional Help & Information