Dahlia Support: How To Keep Dahlias From Falling Over 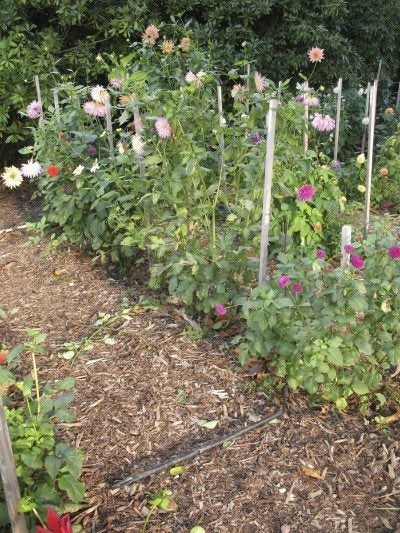 Imagine a huge plant decorated with intensely colored and textured blooms that bear rayed petals in varying styles. The plant might be a dahlia, one of the most diverse species of flowering perennials available. Dahlia blooms may be as small as a quarter or as large as a dinner plate. The heavier-bearing plants need support to ensure that the blooms stay erect and out of the dirt. There are many professional dahlia staking ideas for purchase, but you can inexpensively make your own dahlia support.

Dahlia growers are familiar with the signs. Muddy blooms pasted to the earth and bedraggled flowers with bent, broken stems. Dahlias are prolific producers after a few years. These tuberous plants have slender, erect stems which are not always capable of supporting the larger blooms. Staking dahlia plants is important during the season to keep the leafy stems rising to the sun and prevent damage to the flowers. Here are a few great tried and true methods on how to keep dahlias from falling over.

Dahlia support is a crucial step in protecting these massive plants and their vigorous flowers. Some of the easiest and most economical dahlia staking ideas come from novice attempts to erect some sort of structure of support.

Every gardener has their own ideas of the best ways to stake dahlias. Purchased forms or even pruned sticks in the shape of a “y” remove the need for most tying. These allow the plant to rest its stem naturally in the “y” and support it gently.

You may also choose to purchase a wire dahlia support which is laid over stakes and has a grid-like frame that stems grow through.

A chicken wire cage or even a tomato cage is also useful to keep the slender stems upright. Over time the foliage of the dahlia will cover up the unsightly cage and gives all-over support.

How to Keep Dahlias from Falling Over

One of the biggest tips from experts is to consider dahlia support at the time you plant the tubers. Have a plan in place before you ever see sprouts. If you are using stakes or rebar, plant the tubers so each eye is right next to previously placed stakes. The eye will create the first sprout, which will be situated next to the stake for easy training.

Another option is to plant many tubers within a small space and then stake around the area. As the tubers sprout, you can run a line of twine around the entire patch, essentially corralling all the interior greenery and allowing the mass to self-support in the center.

It is important to divide your tubers every three years. This will force larger, sturdier plants and prevent splayed, flopping specimens.