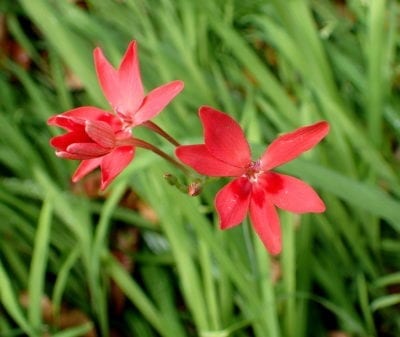 If you like the look of freesia flowers but wish you could find something similar that wasn’t quite so tall, you’re in luck! False freesia plants, a member of the Iridaceae family, can add a bright splash of red to the garden in late spring and early summer. Its shorter stature makes it ideal for borders and rock gardens. Plus, false freesia plant care is relatively easy! Learn how to grow false freesia in your garden.

What is False Freesia?

False freesia produces a cluster of six trumpet-shaped flowers per stem. Flower color can vary from white to shades of pinks and reds, depending on the variety. Blooms usually reach a height of about 12 inches (31 cm.).

How to Grow False Freesia Plants

False freesia plants prefer full sun and are winter hardy in USDA zones 8 to 10. In these areas, planting false freesia corms in the fall is recommended. Sow the corms to a depth of 2 to 4 inches (5-10 cm.). False freesia can readily propagate from seeds and can become prolific to the point of being invasive. When needed, divide false freesia in the spring.

When planting false freesia corms outside of zones 8 to 10, they can be grown as annual garden flowers or in containers. Plant the corms in early spring. In the fall, bring containers inside or dig up the bulbs and store overwinter in a dry environment at a temperature of approximately 50 degrees F. (10 C.).

False freesia plants can also be started indoors from seeds and transplanted into the garden. Seed germination can take several weeks, so it’s recommended to start seeds two to three months before the final frost. Seeds form after flowering and can be collected by drying mature seed pods. Fresh false freesia seeds are bright orange or red in color. When starting false freesia from seeds, sow seeds to a depth of 1/8 inch (3 mm.).

False freesia plant care is fairly simple with no reported issues from insects or disease. It’s a drought resistant flower, but requires moist, well-drained soil during its growing and blooming stages.

After blooming, false freesia plants enter a period of dormancy and the leaves die back. During dormancy, it prefers a drier substrate.

Printer Friendly Version
Read more about Freesia
<Previous
Did you find this helpful? Share it with your friends!
FacebookTweetPinEmail
Related Articles
Newest Articles
You might also like…
Additional Help & Information