Trouble With Freesia Plants: Learn About Freesia Diseases And Pests 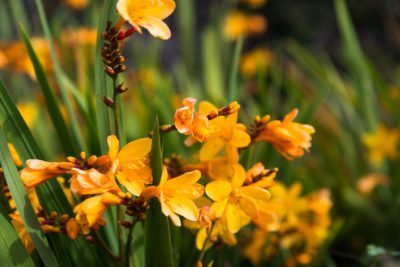 Carefree freesias in a garden space are a wonderful addition, but nothing in the plant kingdom is truly without worry. A few common problems plague freesias, but many are simple to deal with if you’re armed with the right knowledge. Let’s learn more about freesia troubles.

Graceful and elegant, freesias bring some understated class to the garden border or can create a massively impressive planting all by themselves. Although these iris relatives are generally hardy, there are some diseases and pests that can cause them serious issues. When you have problems with freesias, it’s important to know what you’re dealing with so you can choose an appropriate course of action.

Aphids. These soft-bodied sap-sucking insects can cause leaves and flowers to emerge twisted or cause yellowing in sufficient numbers. They’re simple to cure if you’re dedicated to spraying or wiping them away daily until the population is gone. Because ants sometimes farm aphids, it’s also important to place ant baits nearby anytime you’re plagued with aphids.

Slugs and snails. These land-based mollusks can wreak havoc on a garden with their nighttime visits, leaving chewed leaves and flowers behind. If you suspect slugs or snails, go out into the garden at night with a flashlight to confirm your suspicion, then handpick as many as you can find. Dunking them into a bucket of soapy water will dispatch the pests quickly. In addition, you may want to place beer traps around the garden in shallow dishes; just make sure you clean them daily. Diatomaceous earth sprinkled around plants may also help.

Bacterial soft rot. Caused by a bacterial infection, bacterial soft rot will start out as tiny, water-soaked spots on leaves, stems, or blooms, then enlarge and dry out, leaving a gray, black, or brownish spot behind. In very wet conditions, sick plants may also exude a brownish mass of bacteria. There’s very little you can do once this disease has set in, but reducing moisture around plants with very mild infections can slow the progression. Generally, it’s best to discard or destroy infected plants to prevent the bacteria from spreading.

Fusarium wilt. Among the most frustrating garden diseases, Fusarium wilt is incurable once it has started. This fungal pathogen lies dormant in the soil, waiting for its chance to infect plants. When conditions are too wet or plants are overfertilized, you may notice your freesia begin to wilt despite adequate care. The yellow leaves and general decline that follows will usually end in death. Improve your garden drainage, solarize the soil and try again next year – you’ll have much better luck.

Iris leaf spot. Tiny, yellow to green water-soaked lesions can be an early sign of iris leaf spot, but it’s not long before they enlarge to about ¼ inch or about 0.6 centimeters. Spots appear more aggressively once the plants have bloomed, often merging into bigger irregular areas. They can usually be kept in check by moving your freesias to a better draining site, removing all spent leaves at the end of the season, as well as when you’re dividing clumps. You can also remove infected tissue when it appears to reduce the number of active spores.

Printer Friendly Version
Read more about Freesia
<PreviousNext>
Did you find this helpful? Share it with your friends!
FacebookTweetPinEmail
Related Articles
Newest Articles
You might also like…
Additional Help & Information