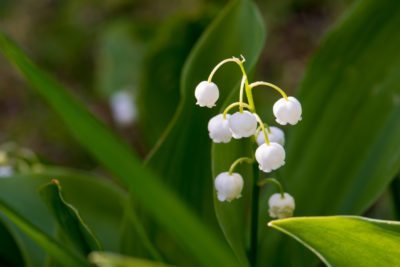 Few spring flowers are as charming as the nodding, fragrant lily of the valley. These woodland flowers are native to Eurasia but have become very popular landscape plants in North America and many other regions. However, behind their cute exterior and pleasant scent lies a potential villain. Is lily of the valley safe for gardens?

Lily of the valley toxicity makes it unsafe to have around children and pets. The plant is so dangerous that ingestion could result in a trip to the emergency room, or in rare cases, death.

Is Lily of the Valley Safe for Gardens?

Sometimes the smallest organisms pack the biggest wallop. This is the case with lily of the valley. Is lily of the valley poisonous? All parts of the plant are considered potentially toxic. The plant contains over 30 cardiac glycosides, many of which inhibit the heart’s pumping activity. Children and domestic pets are most commonly affected, but even a large man can be felled by the toxins.

In a home landscape where there are no children or pets, lily of the valley is probably safe. However, once you add little ones, cats and inquisitive dogs to the equation, the potential for danger increases. It doesn’t matter if only the flowers are eaten or if the entire stem or roots are consumed. The method of introduction to the toxins is gastronomic, although there are also contact dermatitis reports.

The most common effects are stomach ache, blurred vision, slow and irregular pulse, and in severe cases, seizures, vomiting and diarrhea, heart arrhythmia and even death. Lily of the valley toxicity is severe and difficult to treat. A rapid trip to the hospital is required even in cases of suspected ingestion.

Toxicity of Lily of the Valley

Lily of the valley can be fatal if ingested, especially to children. The method of action is through cardiac glycosides, which create an effect much like exposure to that of Digitalis, found in foxglove. The plant is classified as a “1” on the poison scale, which means it has major toxicity that can lead to death. It is also a “3” due to its often severe dermatitis.

Experts recommend calling a Poison Control Center or calling 911 if any part of the plant is ingested. Convallatoxin and convallamarin are two of the main toxic glycosides in lily of the valley, but there are numerous others as well as saponins, which have not been well researched and whose method of action are not fully understood. The overwhelming effect is one of a cardiac episode.

Note: As little as two leaves of the plant can be a fatal dose in young children and pets. If this plant is present in your landscape, it is wise to remove it. This can help prevent any accidents with lily of the valley poisoning and keep the garden safe for everyone.

Printer Friendly Version
Read more about Lily Of The Valley
<PreviousNext>
Did you find this helpful? Share it with your friends!
FacebookTweetPinEmail
Related Articles
Newest Articles
You might also like…
Additional Help & Information

Read more articles about Lily Of The Valley.