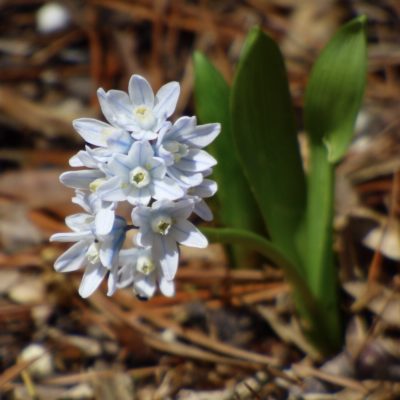 Puschkinia scilloides, also known as striped squill or Lebanon squill, is a perennial bulb that originated in Asia Minor, Lebanon, and the Caucasus. A member of the Asparagaceae (asparagus family), this small relative of the hyacinth is perfect for rock gardens and woodland plantings.  Puschkinia blooms in spring and is an attractive addition to mixed plantings with later-blooming bulbs.

Because it grows only 4-6 inches (10-15 cm.) tall, Puschkinia can be used as a substitute for a ground cover. Striped squill is also a good choice for planting under deciduous trees, as long as it can access some sunlight, and it is one of those rare plants that can tolerate growing under a black walnut tree. It doesn’t tend to suffer from pest or disease problems and also tolerates deer.

Each Puschkinia plant produces a single flower stalk topped with a cluster of small bluish-white flowers. The flowers have delicate blue stripes down the middle of each petal and a pleasant aroma. The narrow, pointed, dark green leaves are also attractive.

How to Plant Puschkinia Bulbs

Striped squill can also be grown from seed, which is useful if you cannot find the bulbs, but growing from seed has two disadvantages: the seeds need constant moisture during their month-long germination time, and plants grown from seed won’t bloom until they are four years old. Plant the seeds in the fall and provide them with shade and water until they sprout.

Puschkinia plant care starts with a proper planting site. The bulbs are hardy in gardening zones 4 to 8. They require well-drained soil, preferably containing some sand or gravel, and they will do well in full or partial sun but not in full shade.

Keep your Puschkinia bulb planting healthy by watering consistently during the blooming period to ensure the soil remains moist. After the flowers fade, leave the foliage on the plants until it turns yellow on its own. Consider mulching over the bulbs in the fall to protect them from the winter cold.

Puschkinia bulbs will establish themselves in the garden and will spread both by seeds and by producing offsets. If you notice the number of flowers in your Puschkinia bulb planting has declined in past years, the plants are overcrowded and it is time to divide them. Do this by separating bulb offsets in the fall and planting them in a new location.