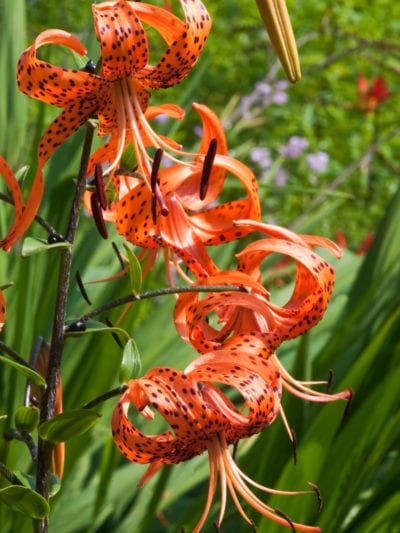 Growing turk’s cap lilies (Lilium superbum) is an elegant way to add towering color to the sunny or partially shaded flowerbed in summer. Turk’s cap lily information tells us that these flowers nearly became extinct a few decades ago, because of their popularity as an edible. It seems the bulb from which the turk’s cap flowers grow is a tasty addition to stews and meat dishes.

Fortunately for the flower gardener, the also edible tiger lily distracted these amateur chefs from using all the bulbs of turk’s cap flowers, and the plant was able to re-establish readily. Growing turk’s cap lilies is fairly simple and the tough specimen again blooms in abundance.

Whorls of foliage sprout from the tall stems, along with orange flowers mottled with purple and numerous black seeds. Turk’s cap lily information says flower colors range from burgundy to white, with the orange freckled ones being the most common. The seeds can eventually grow into more turk’s cap lilies, but this is not the quickest way to get summer blooms.

How to Grow a Turk’s Cap Lily

Then, plant bulbs in the fall. Turk’s cap flowers may bloom as high as 9 feet (2.5 m.), so add them to the middle or back of the flowerbed or center them in an island garden. Add short annuals at their base to help keep roots cool.

Turk’s cap lilies, sometimes called Martagon lilies, are adaptable to dappled shade when growing in the landscape. More than other types of lilies, turk’s cap flowers will bloom in areas other than full sun. When planted in full shade, however, you’ll find the entire plant leaning toward the light and in this situation, turk’s cap flowers may require staking. Avoid full shade areas for this specimen, as this will also reduce the number of blooms on the turk’s cap flowers.

Use turk’s caps often as a cut flower. They’re long-lasting in the vase. Remove only one-third of the stem when using them as cut flowers, as the bulbs need the nutrients to store for next year’s show.

Now that you’ve learned how to grow a turk’s cap lily and how easy it is to care for them, get some started in the garden this fall.