Planting Agave: How To Grow Agave 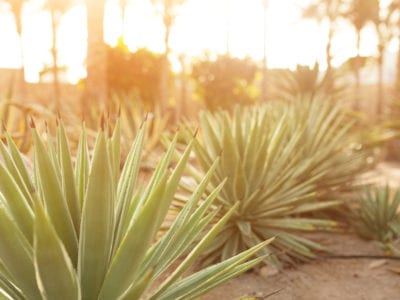 Agave is a long-leaved succulent plant that naturally forms a rosette shape and produces a flower spire of attractive cup shaped blooms. The plant is drought tolerant and perennial, making it ideal for the mature arid garden. Many agave plants are native to North America and are adaptable to colder climates in the Pacific Northwest and even Canada.

Almost every climate is capable of growing agave, as some are hardy down to single digits for short periods of time and with shelter. Agave is in the Agavaceae family of succulents which include dracaena, yucca and ponytail palms.

The century plant (Agave americana) is one of the most notorious landscape agaves. It produces a lovely inflorescence (flower) and then the main plant dies, leaving behind pups or offsets. The American agave or American aloe, as it is also called, has a white stripe running down the center of the leaves. It is a warm season agave only.

There are many other types of agave, which makes it easy to find and garden with this stunning plant. Some of these include:

Agave have a large tap root and do not transplant well, so choose an appropriate site when planting agave. The majority of the roots are surface roots and do not require a deep hole if planted when young.

Check your soil for drainage or, if planting in heavy clay soils, amend the soil with sand or grit. Mix in enough sand to make the soil halfway comprised of grit.

Water the plant diligently for the first week and then cut it to half the second week. Taper off even more until you are only watering once every week or two.

How to Grow Agave

Growing agave is easy if you plant the right variety in the right location. Agaves need full sun and gritty soil that percolates easily. They can even do quite well when potted but use an unglazed clay pot that will allow evaporation of excess moisture.

Water needs are moderate to light depending upon the heat of the season but the plants should be allowed to dry out before irrigation.

In spring they benefit from the application of a granulated time release fertilizer that will provide nutrient needs for the season.

Many varieties of agave will die after blooming and then produce pups or offshoots from their base to replace themselves. On varieties where the parent plant doesn’t die after flowering, it is a good idea to get long handled pruners and remove the spent bloom.

After establishment, neglect is actually how to grow agave and produce happy plants.

Agave that are grown in pots require even more grit in the soil and can actually be planted in a cactus mix. The addition of small rocks or pebbles to the soil increases the drainage capabilities of the container.

Agave plants in containers will require more water than those in the ground and will need to be re-potted every year or so to replenish soil and root prune the plant. Agave plant care for container grown plants is otherwise the same and it affords you the ability to bring sensitive forms indoors when temperatures plummet.

Printer Friendly Version
Read more about Agave
Next>
Did you find this helpful? Share it with your friends!
FacebookTweetPinEmail
Related Articles
Newest Articles
You might also like…
Additional Help & Information