Easter Cactus
By: Becca Badgett, Co-author of How to Grow an EMERGENCY Garden
Printer Friendly Version 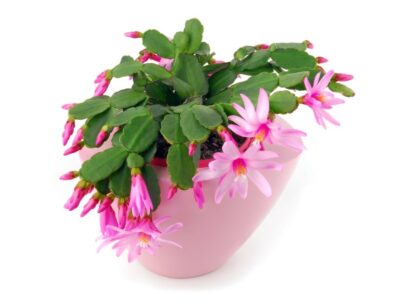 As hybridization on holiday cactus plants expands, more people are bringing them into their homes to decorate for holidays. As these purchases increase, so does the range of issues some are finding with the plants. It is not likely that problems have increased, but more people are experiencing them because more people have the plants.

Easter cactus is actually a jungle cactus, growing in its native habitat in the Brazilian rainforest. There it is usually found in the crotch of a tree limb, several feet above the ground. This puts the plant in a position to get no more than filtered light, as much of the sun is blocked by surrounding trees.

In captivity, these plants are often placed in total darkness of up to 14 hours per day for several weeks to force blooms for the holiday. This process with Easter cactus usually begins around the first of January.

Problems are not common in most kinds of holiday cacti, but they do occasionally crop up. Easter cactus leaves sometimes get wrinkled or fall off, as do their buds. After spending several weeks in darkness for 14 hours per day it is not surprising that this sometimes happens.

Dropping buds is most likely to happen when the plant is moved. The Easter cactus leaves falling off may result from temps that are too high, exposures to drafts, and not enough light. Bud or leaf drop can also result from under or over watering, if humidity is too low or even when the plant is in the path of fumes from a gas-burning stove.

Perhaps your plant has the symptoms of overwatering, but you’ve only watered it a small, limited amount. Chances are the Easter cactus is planted in improper soil. When putting the newly purchased plant into a permanent pot, use a cactus potting mix amended with coarse sand and pumice. This adds even faster drainage, so you don’t have to be concerned with root rot.

Inconsistent watering is another issue experienced with this plant. As a succulent, watering should always be limited. Often, the houseplant gardener will think they’ve given the plant too little water and then respond by giving it a large amount. Keep watering consistently to avoid a number of other problems, such as blistering leaves and corky roots.

When bloom time has ended, you may wish to keep your plant outside in a shady and filtered light spot for the remainder of the summer. This gives some insects a chance to make their home amongst the Easter cactus branches. You will likely have to treat to remove aphids, mealybugs, scale or spider mites before bringing it back inside. Seclude the plant and treat it with alcohol in a spray bottle or on a cotton ball. This method might take several days until all pests are removed from the plant. If this doesn’t get rid of the pests in 10 days, step up to a stronger pest control method.