Manfreda Plant Growing – How To Care For Chocolate Chip Manfreda 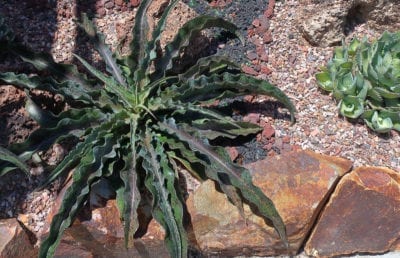 The chocolate chip plant (Manfreda undulata) is a visually interesting species of succulent which makes an attractive addition to the flowerbed. The chocolate chip manfreda resembles a low-growing rosette with frilly leaves. The dark green foliage is dotted with attractive chocolate brown spots. The resemblance to chocolate chips gives this variety its name.

Manfreda plants are closely related to the agave family, which explains why this variety of manfreda is sometimes called the chocolate chip false agave. Like many varieties of manfreda, chocolate chip doesn’t die after blooming as do agave plants. Planted outdoors, it blooms during June in the Northern Hemisphere or December south of the equator. The buds form on tall stalks in late spring, followed by fascinating wiry type blossoms.

The chocolate chip plant has a low-growing profile, only reaching heights of about 4 inches (10 cm.) tall. Its elegantly arched, spineless leaves bear resemblance to a starfish. The long succulent leaves give the plant a diameter of 15 inches (38 cm.) or more. This native of Mexico retains its leaves year-round but only in tropical climates or when overwintered indoors.

Manfreda chocolate chip plants are deep rooted and prefer a well-drained, drier soil. They perform well even in poor soil with a rocky or gritty growing medium. For container gardening, use a pot which offers plenty of vertical root space. A minimum of 12 inches (31 cm.) deep is recommended.

Plant in a sunny location; however, they do prefer a bit of afternoon shade in hot climates. Once established, chocolate chip plants are drought resistant. Supplementing water during dry spells keeps succulent leaves firm.

Chocolate chip is root hardy to USDA zone 8 but may lose its leaves during the winter. It does well as a container plant and can be brought inside when grown in colder climates. It’s best to reduce watering of potted manfreda during winter dormancy to prevent the roots from rotting.

Chocolate chip false agave can be propagated by offsets but produces these very slowly. It can also be grown from seeds. Germination takes 7 to 21 days at room temperature. In addition to its visual appeal, it is also verticillium wilt resistant and can be planted in areas where this virus has been an issue.