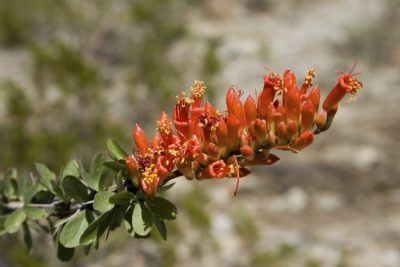 If you’ve visited northern Mexico or the southwestern corner of the United States, you’ve likely seen ocotillo. Dramatic plants with statuesque, whip-like stems, ocotillos are difficult to miss, especially in springtime when the long, thorny canes are tipped with spikes of fiery red, tube-shaped blooms. Although ocotillo is usually an in-ground plant, there’s no reason you can’t grow ocotillo in containers. If this idea strikes your fancy, read on to learn about growing ocotillo in a pot.

How to Grow Ocotillo Plants in Containers

Ocotillo (Fouquieria splendens) is a desert plant that grows in U.S. Department of Agriculture plant hardiness zones 8 through 11. If you live in a cooler climate, bring the ocotillo indoors during fall and winter.

The best ocotillo potting soil is a fast-draining potting mix such as a product formulated specifically for cactus and succulents.

Plant the ocotillo in a container with at least one drainage hole. Don’t select an overly large container, as excess potting soil is likely to cause this succulent plant to rot. A pot just slightly larger than the root ball is ideal. The plant may become top-heavy, so use a container with a solid, heavy base to prevent tipping.

Water lightly as necessary to keep the soil moist – but only until the roots are established. Thereafter, be extremely careful about overwatering ocotillo in containers. Like all succulents, ocotillo is prone to rot in damp soil. As a general rule, water only when the top 2 to 3 inches (5 to 7.6 cm.) of soil is dry. Never allow the pot to stand in water.

Water indoor ocotillo sparingly when the plant is dormant during the winter months. Watering too little is always better than overwatering, and once a month is usually sufficient.

Place the container where the ocotillo is exposed to full sunlight. Without bright sunlight, ocotillo plants tend to become leggy and produce fewer blooms.

Repot ocotillo into a container one size larger whenever the plant is rootbound, usually indicated by roots growing through the drainage hole. Spring is the best time for this task.

Printer Friendly Version
Read more about Ocotillo
<PreviousNext>
Did you find this helpful? Share it with your friends!
FacebookTweetPinEmail
Related Articles
Newest Articles
You might also like…
Additional Help & Information