Peyote Plant Info: What You Should Know About Growing Peyote Cactus 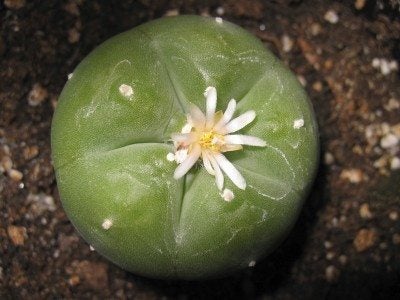 Peyote (Lophophora williamsii) is a spineless cactus with a rich history of ritual use in the First Nation culture. In the United States the plant is illegal to cultivate or eat unless you are a member of the Native American Church. The plant is considered poisonous by U.S. officials but First Nations people use it as a sacrament and pathway to religious and personal enlightenment.

While growing peyote is not allowed unless you are a member of the NAC, it is a fascinating plant with attributes worth learning about. There are, however, peyote plant look-a-likes you can grow at home that will satisfy your urge to cultivate this cute little cactus without breaking the law.

What is the Peyote Cactus?

Peyote cactus is a small plant native to the Rio Grande Valley of Texas and northeastern Mexico. It has numerous psychoactive chemicals, chiefly mescaline, which is used in religious ceremonies to elevate awareness and cause a mental and physical high. Peyote cultivation is a time-consuming process, as the plant can take up to 13 years to mature. In any event, growing peyote is illegal unless you are a member of the church and have filed the proper paperwork.

The bulk of the plant is underground where thick, wide roots form, looking much like parsnips or carrots. The upper part of the cactus grows about an inch (2.5 cm.) out of the ground in a rounded habit with a diameter of less than 2 inches (5 cm.). It is greenish blue with 5 to 13 ribs and fuzzy hairs. Peyote plants often have tubercles, which give the ribs a spiral appearance. Occasionally, the plant will produce pink flowers which become club-shaped, edible pink berries.

The plant is considered endangered due to over-harvesting and land development. A similar-looking cactus, Astrophytum Asterias, or star cactus, is legal to grow, but it is also endangered. Star cactus has only eight ribs and a fibrous root system. It is also called the sand dollar or sea urchin cactus. Star cactus requires similar care to that of peyote and other cacti.

The part of peyote that is used for ritual is the small cushion-like upper part. The larger root is left in the ground to regenerate a new crown. The upper part is dried or used fresh and is called a peyote button. These are generally no larger than a quarter once dried and the dosage is 6 to 15 buttons. Older peyote plants produce offsets and develop into larger clumps of many plants. The cactus has nine narcotic alkaloids of the isoquinoline series. The bulk of the effect is visual hallucinations, but auditory and olfactory alterations are also present.

Church members use the buttons as a sacrament and in religious teaching sessions. Care of peyote cacti is similar to most cacti. Grow them in a half and half mix of coconut husk and pumice. Restrict water after seedlings establish and keep the plants in indirect sun where temperatures are between 70 and 90 degrees F. (21-32 C.).

A few words on peyote cultivation

An interesting bit of peyote plant info is the form of documentation necessary to grow it.

Only the five states listed allow church members to grow the plant. It is illegal in all other states and is federally unlawful. In other words, it is not a good idea to try to grow it unless you are a documented member of the Native American Church. For the rest of us, the star cactus will provide similar visual appeal and growth habit, without the danger of jail time.

Disclaimer: The content of this article is for educational and gardening information purposes only.