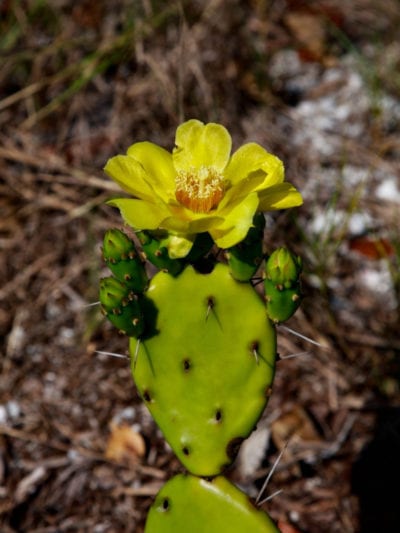 What is a Tulip Prickly Pear?

Opuntia phaecantha is a medium sized cactus. It matures to a shrub-like mounding form that may be 5 feet tall by 15 feet wide (1.52 by 4.57 m.). The stems or joints attach to pads and can create quite a thicket over time. The spines are both persistent and thicker – short-term glochids set in areoles.

Joints are bluish-green but can develop a reddish tinge in cool weather. The bright, showy flowers develop into fruits called “tunas.” These are red to purple and as long as an index finger with juicy, sweet pulp.

One of the more important aspects of tulip prickly pear info is its preference for sun, alkaline soil and warm ambient temperatures. However, the plant can withstand occasional freezes.

Like other prickly pears, growing brown spined prickly pears is easy. This prickly pear is adapted to United States Department of Agriculture zone 7 and up. These Opuntia are found growing widely in the Gobi Desert. They like to be quite hot and dry, and thrive when precipitation is infrequent. That is because they store moisture in their thick pads.

The plants also have waxy skin that prevents evaporation and spines that help conserve moisture. The cells of the plant also contain more photosynthetic material, called chloroplasts, than leafed plants. This characteristic makes them uniquely adapted to long days of sun, which is converted into plant sugars.

The plant thrives in full to partial sun, in well-drained soil. Boggy or slow draining soil is the Opuntia’s Achilles heel and can cause rot and even death in the plant. Site it where there will be no collecting water and the plant receives plenty of sunshine throughout the day, at least 6 to 8 hours.

Cactus rarely need fertilizer, but if you wish to encourage flowers and fruit, feed the plant in late winter to early spring with a balanced cactus food. Water plants when the top 3 inches (7.6 cm.) of soil is dry to the touch. Minimize watering by half in winter.

Other than that, watching the plant for signs of mealybugs and scale are the primary care issues. Tulip prickly pear care is very straightforward and these plants will reward you with a number of seasonal attributes to brighten up your landscape.

Printer Friendly Version
Read more about Prickly Pear Cactus
<PreviousNext>
Did you find this helpful? Share it with your friends!
FacebookTweetPinEmail
Related Articles
Newest Articles
You might also like…
Additional Help & Information