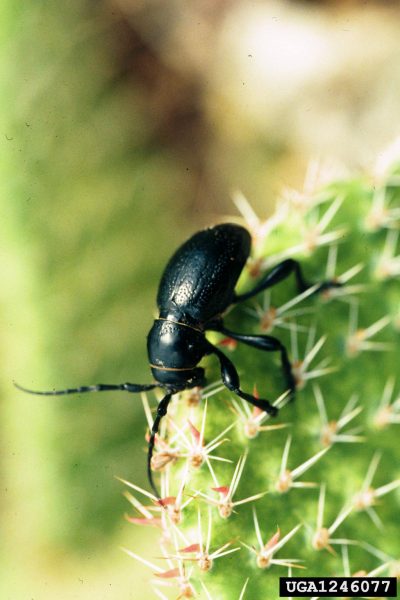 What is a Cactus Longhorn Beetle?

Cactus devotees and managers of cactus gardens may shudder when they see the cactus longhorn beetle. Do cactus longhorn beetles hurt cacti? The adult is not the destroyer of the plants, but rather its progeny. The insect’s favorite plants are those that are not densely spined but also haunt Cholla and Prickly Pears. If you see holes in the plant filled with a black substance, you may well have longhorn larvae inside your cactus.

The feeding activity of the juveniles can severely damage even large cacti, which will soften in spots and eventually collapse in on themselves as tissues are consumed. Fortunately, the insect has plenty of natural predators and is rarely an issue of high concern.

In rare or valuable cactus specimens, a regimen of vigilance and control of cactus longhorn beetles is necessary to protect the plants. You can spot longhorn beetles on cacti in summer, in the early morning, and at sunset.

The female lays individual eggs which hatch into brown-headed larvae. These burrow into the cactus, secreting a green substance into the hole which hardens to a blackened tone, securing their entry. Larvae will feed on the roots and interior tissues of the cactus. They overwinter inside and emerge in spring as adults.

During the day, adults hide in the sand to keep cool. Their primary objective is to mate before they die and feed infrequently but usually on tender new growth. Occasionally, adults will feed on new shoots and plants such as Portulaca.

Once you see longhorn beetles on cactus, it’s time to grab a flashlight and get to work. Grab the family and mete out some old-fashioned control of cactus longhorn beetles. While adult feeding is unlikely to destroy a plant because they feed little and live a very short life, the young who hatch and overwinter in the plant have months to liquefy the interior of a cactus. This means catching the adults before they can hatch another generation of cactus predators.

Adults are easy to spot when the sun is going down or just coming up. You can easily pick them off and destroy them in whatever way your karma will allow. If that means driving them out to the desert, away from your plants, by all means, do that. Most people just close their eyes and step on them.