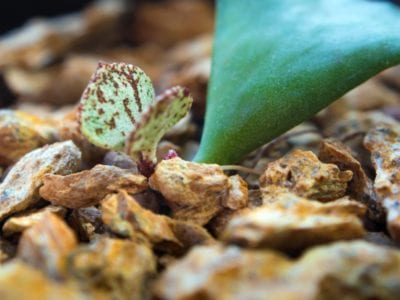 A crinkle leaf houseplant is not at all cold-hardy and should be kept indoors except during the summer. In spite of its frailty in chilly climes, it makes an easy-to-grow plant indoors. The crinkle leaf succulent is native to South Africa and needs warm temperatures and moderate water to thrive.

What is a Crinkle Leaf Plant?

The Cristatus crinkle leaf plant is related to the Kalanchoe plant, which is often found in plant gift stores. The crinkle leaf houseplant is hardy to USDA zone 9a and above. If you live below this zone, it will be part of your indoor plant colony. The plant has 2-inch (5 cm.) long grayish-green leaves with ruffled edges forming a rosette shape. Newer central leaves are deeper green and slightly curled. All foliage is pleasantly fuzzy. Tubular flowers grow on an 8-inch (20.5 cm.) stalk. They are white with pale red edges.

These small succulents are found wild in the eastern Cape province of South Africa. They are in the genus Adromischus. The name comes from the Greek ‘adros’ meaning thick, and ‘mischos’ meaning stem. There are many species in the genus, but only A. cristatus has the signature triangular leaves. There are several cultivars from the parent plant including Indian Clubs, which produce fat, oval, club-like foliage. You can propagate crinkle leaf plants just from a leaf. Place it on cactus soil and wait until it roots. In time you will have more plants.

If growing the plant indoors, keep it away from cold windows and drafty areas. Place the container in a bright window but avoid exposing the leaves to searing light. Use very gritty soil and a well-draining container. Water when soil is dry to the touch in spring and summer. The soil should be moderately moist but not soggy. In fall and winter, water about half the time as the plant is in a dormant state. Crinkle leaf plants can be fertilized once in spring with a time-release formula. If you live where it is warm, keep the plant outside provided nights are not too cool. Keep watch for pests like mealybugs.