Succulents and Frost: How To Save A Succulent From Frost Or Freeze 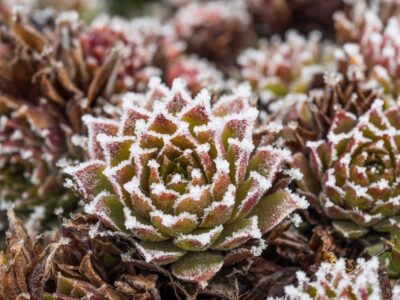 Weather is a capricious thing. It can be mild one minute, and wild the next. Even zones with relatively consistent temperatures and weather can have a bit of a temper tantrum and drop a load of snow or produce extreme winds. Conditions like these can do a number on our succulents. Can succulents withstand cold? Succulents and frost don’t traditionally go together and can result in damage to these types of plants, but all may not be lost.

Protecting succulents from frost is crucial to their survival. There are some succulents that are cold hardy, but the majority are not. Winter weather that comes in hard may surprise some growers and cause injury to plants. Will succulents survive a freeze? Warm weather succulents and freezing temperatures are a recipe for harm but can be avoided with protection from frost.

Northern climates tend to be somewhat inhospitable to outdoor succulents. Plants such as Sempervivum, some Sedum, Rosularia, Jovibarba, Delosperma, and hardy Opuntia, however, will be fine in low temperatures. There are even some hardy Agave that won’t become damaged in ice and snow. Desert plants do receive cold temperatures at night, which gives other types of succulents some short term tolerance to freezing. Extended cold may cause injury though. The question, “Will succulents survive a freeze?” is determined by the variety as well as soil type, site, and duration of cold temperatures. One way to avoid potential problems from succulents and frost is to plant them in containers which can be moved if the forecast indicates extreme temperatures.

In ground plants need fortification to avoid injury. Providing some shelter from cold can prevent freezing of plant cells which can lead to rot. Watering a day before forecast indicates a cold event is not recommended for succulents. Dry, well draining soil is a better defense. Cover plants prior to a cold event with an old sheet or frost fabric to ward off frost and direct contact with snow. As an added layer of defense, run a lit string of holiday lights under the sheet to warm the area slightly. Try to prevent the lights from touching the fabric with the use of stakes or other supports.

Freeze damage often occurs at the tips of cacti and other succulents. It may appear as black rot or even pink and yellow soft spots. How severely the plant is affected will indicate if it will survive.  If damage does occur, prune away diseased material with a sharp, sterile knife. In most cases, the plant will regenerate and recover. Take off wet, mushy leaves immediately as they increase the change of rot in the entire plant. On plants like Agaves, whose leaves dry out after a freeze, removal is best done after all chance of frost has passed. Give the plants the same consistent care and they should recover.