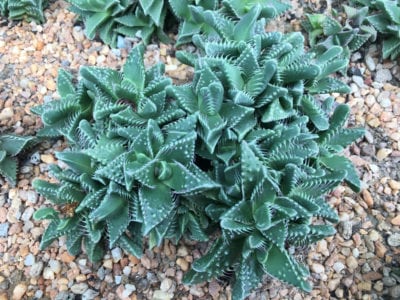 Faucaria tigrina succulent plants are native to South Africa. Also referred to as the Tiger Jaws succulent, they can tolerate slightly cooler temperatures than most other succulents which makes them perfect for growers in temperate climates. Intrigued and want to learn how to grow Tiger Jaws? The following Tiger Jaws plant info will teach you how to grow and care for Tiger Jaws.

This succulent grows in clumps of stemless, star-shaped rosettes amongst rocks in its native habit. The succulent is a low growing perennial that only reaches about 6 inches (15 cm.) in height. It has triangular shaped, light green, fleshy leaves that are about 2 inches (5 cm.) in length. Surrounding each leaf are ten soft, white, upright, tooth-like serrations that look like a tiger or shark’s mouth.

The plant blooms for a few months in the fall or early winter. Flowers range from bright yellow to white or pink and open midday then close again in the late afternoon. The sun dictates whether they will be open or closed. Faucaria succulent plants will not bloom at all if they don’t get at least three to four hours of sun and are a few years old.

How to Grow a Tiger Jaws

Like all succulents, Tiger Jaws is a sun lover. In their native region they occur in areas of rainfall, however, so they do like a bit of water. You can grow Tiger Jaws outdoors in USDA zones 9a to 11b. Otherwise, the plant can be easily grown in containers which can be brought inside during cooler weather.

Plant Tiger Jaws in well-draining soil, such as cactus potting soil, or make your own using non-peat based compost, one part course sand, and two parts soil.

Situate the succulent in an area with at least three to four hours of sun and in temperatures from 70 to 90 degrees F. (21-32 C.). While Tiger Jaws can tolerate cooler temps than these, they do not do well when temperatures fall below 50 degrees F. (10 C.).

When temperatures are extremely high, this succulent will tolerate the heat but does stop growing and does need to be watered. Water when the soil is dry to the touch. Cut back on watering in the winter; water about half as much as usual.

From spring through the end of summer, fertilize the succulent with a diluted liquid plant food.

Repot every two years or so. Propagate more Tiger Jaw plants by removing a rosette, allowing it to callous for a day and then replanting it in the same manner as above. Keep the cutting in the shade in barely moist soil medium until it has had time to adapt and acclimate.