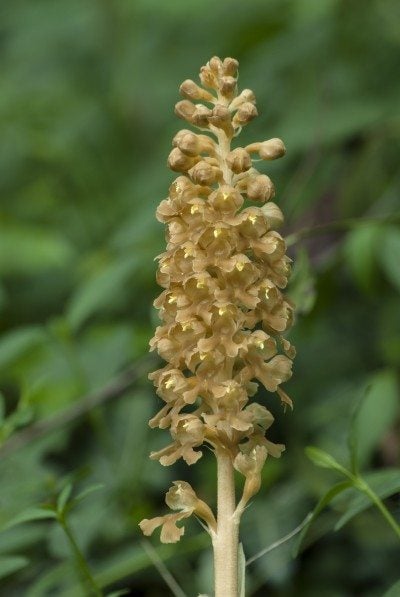 Bird’s nest orchid wildflowers contain almost no chlorophyll and are unable to produce any energy from the sunlight. In order to survive, the orchid must depend on mushrooms throughout its entire lifecycle. The orchid’s roots are connected to the mushroom, which breaks down organic material into nutrition that sustains the orchid. Scientists aren’t sure if the mushroom gets anything from the orchid in return, which means that the orchid may be a parasite.

So, once again, what is bird’s nest orchid? If you were fortunate enough to stumble across the plant, you would be surprised at its unusual appearance. Because the orchid lacks chlorophyll, it is unable to photosynthesize. The leafless stems, as well as the spiky blooms that appear in summer, are a pale, honey-like shade of brownish-yellow. Although the plant reaches heights of about 15 inches (45.5 cm.), the neutral color makes bird’s nest orchids difficult to spot.

Bird’s nest orchids aren’t exactly pretty, and people who have seen these wildflowers up close report that they emit a strong, sickly sweet, “dead animal” aroma. This makes the plant attractive – maybe not to humans, but to a variety of flies that pollinate the plant.

Where Does Bird’s Nest Orchid Grow?

So where does this unique orchid grow? Bird’s nest orchid is found primarily in the deep shade of birch and yew forests. You won’t find the plant in a conifer woodland. Bird’s nest orchid wildflowers grow across most of Europe and parts of Asia, including Ireland, Finland, Spain, Algeria, Turkey, Iran, and even Siberia. They aren’t found in North or South America.