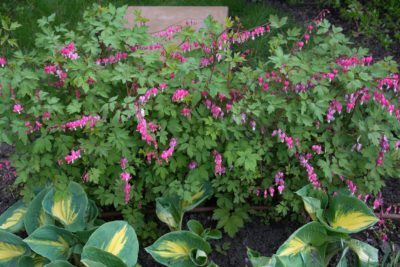 Bleeding heart (Dicentra spectablis) is a relatively hardy plant in spite of its lacy foliage and delicate, dangling blooms, but it can be plagued by a handful of diseases. Read on to learn about common diseases of bleeding-heart plants.

Powdery mildew – If your bleeding-heart plant is covered with powdery patches of black, gray, white, or pink “dust,” it is probably infected by powdery mildew. Left untreated, the patches will grow, causing deformed buds and curled, stunted leaves that eventually drop from the plant. Powdery mildew is unsightly, but it usually isn’t deadly for healthy plants.

Leaf spot – The first sign your bleeding heart is infected with fungal leaf spot is generally small brown or black spots on the leaves. Eventually, the spots grow larger with a yellow ring or halo, and the center of the ring eventually rots out. As the disease progresses, the leaves fall, and the plant soon dies.

Botrytis – A type of gray mold, botrytis causes bleeding-heart plants to turn brown, mushy, and soggy. If you aren’t sure your plant is infected by botrytis, masses of gray or silvery spores are a dead giveaway.

Verticillium wilt – This nasty fungal disease, which is usually fatal, may be lurking on the plant before symptoms are visible. Once the foliage with verticillium begins to wilt, the plant will begin to turn yellow, then brown.

Pythium root rot – Wilted and stunted growth are the initial symptoms of pythium root rot, followed by blackening and rotting of the roots. Pythium root rot often makes an appearance when temperatures are cool, and the soil is soggy.

How to Treat a Bleeding Heart

Treating a sick bleeding-heart starts with removing diseased areas of the plant as soon as possible, using sterile pruning shears. Be careful not to let infected plant parts fall on the ground. Remove the entire bleeding-heart plant if it is badly infected. Otherwise, the disease may spread to other plants. Clean up mulch, leaves, twigs, and other plant matter. Dispose of infected material by burning, or in sealed plastic bags.

Water your bleeding-heart plant in the morning, using a soaker hose or drip irrigation system. Avoid overhead sprinklers. The key is to keep the foliage as dry as possible. Beware of overwatering, as most bleeding-heart diseases are favored by damp, humid conditions.

Ensure the soil is well drained. If poorly drained soil is a problem in your garden, consider growing bleeding heart in raised beds or containers. Provide ample space between plants to allow sufficient air circulation.

Avoid high-nitrogen fertilizers. Instead, use a balanced fertilizer or a fertilizer with a slightly higher phosphorus content.

Fungicides may be helpful, but only when used early in the season, as soon as symptoms are evident.