Caring For Common Mallow Plants In The Garden 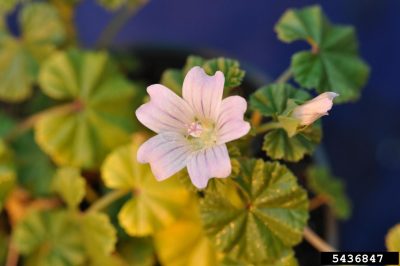 Few “weeds” bring a smile to my face like the common mallow does. Often considered a nuisance to many gardeners, I see common mallow (Malva neglecta) as a beautiful, wild little treasure. Growing wherever it chooses to, common mallow has many health, beauty, and culinary benefits. Before cursing at and killing this so-called “weed,” continue reading to learn about common mallow plants in the garden.

Malva neglecta, commonly called common mallow, is in the mallow family along with hollyhock and hibiscus. Growing 6 to 24 inches (15-61 cm.) tall, common mallow has pink or white hollyhock-like flowers atop long stems covered in circular, wavy-edged leaves. Its resemblance to hollyhock is undeniable. Common mallow plants flower from early spring to mid fall.

Sometimes called ‘cheese weed’ because its seeds resemble cheese wheels, common mallows are self-sowing annuals or biennials. Common mallow plants grow from a long, tough taproot that allows them to survive in harsh, dry soil conditions, which many other plants would suffer in. This is why you often see these pretty little mallows popping up along sandy driveways, roadsides, or other neglected places.

Common mallow was once highly regarded as a medicinal plant by Native Americans. They chewed on its tough root to clean their teeth. Common mallow was also used to treat wounds, toothaches, inflammations, bruises, insect bites or stings, sore throats, and coughs as well as urinary, kidney, or bladder infections. The leaves were bruised, then applied to the skin to draw out splinters, thorns, and stingers too.

Common mallow root extracts were used to treat tuberculosis and new studies have found it to be an effective treatment for high blood sugar. As a natural astringent, anti-inflammatory, and emollient, common mallow plants are used to soothe and soften skin.

High in calcium, magnesium, potassium, iron, selenium, and vitamins A and C, common mallow was a good source of nutrition in many recipes. Leaves were eaten like spinach, cooked, or served raw. The leaves were also used to thicken soups or stews. A paste was made of the roots that were then cooked like scrambled eggs. The seeds, raw or roasted, were eaten like nuts. In addition to its health, beauty, and culinary uses, common mallow is an important plant for pollinators.

Caring for Common Mallow in Gardens

Since the plant has no special care requirements, growing common mallow is a snap. It will grow in most soil conditions, though it seems to prefer sandy, dry soil.

It grows in sun to part shade. However, it will reseed itself throughout the growing season, and can become a little invasive.

For common mallow control, deadhead spent blooms before they can go to seed. These seeds can remain viable in the ground for decades before germinating. If common mallow plants pop up where you do not want them, dig them up and make sure to get all of the taproot.