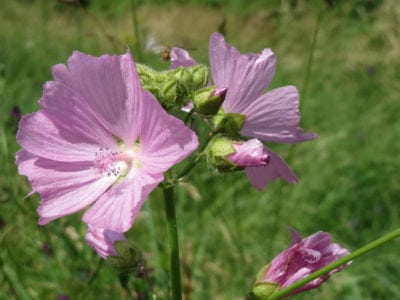 What is musk mallow? A close cousin to the old-fashioned hollyhock, musk mallow is an upright perennial with fuzzy, palm-shaped leaves. Rosy-pink, five-petaled blooms decorate the plant from early summer through autumn. Also known as Australian hollyhock or musk rose, musk mallow is a colorful, low-maintenance addition to the garden, attracting scads of honeybees and butterflies. Read on to learn about growing musk mallow.

Musk mallow (Malva moschata) was transported to North America by European settlers. Unfortunately, it has become invasive throughout much of the northwestern and northeastern parts of the United States, where it is likely to pop up in roadsides, along railroads and dry, grassy fields. Musk mallow often marks the location of old homesteads.

Musk mallow is a hardy plant, suitable for growing in USDA plant hardiness zones 3 through 8. As with common mallow plants, it’s a good idea to consider the invasive potential before you consider growing musk mallow. Your local cooperative extension office is a good source of information. You can also contact the fish and wildlife service in your area.

How to Grow Musk Mallow

Plant musk mallow seeds outdoors in autumn or before the last frost in spring, covering each seed with a small amount of soil. Allow 10 to 24 inches (25 to 61 cm.) between each plant.

Cut the plant to the ground in autumn as part of your musk mallow care each season.

Printer Friendly Version
Read more about Mallow
<PreviousNext>
Did you find this helpful? Share it with your friends!
FacebookTweetPinEmail
Related Articles
Newest Articles
You might also like…
Additional Help & Information